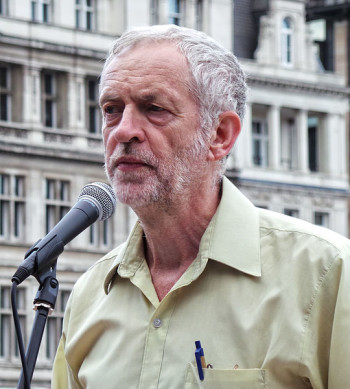 The article read in part: “Jeremy Corbyn is catching flak from Labour figures for suggesting ‘Jihadi John’ should have been brought before the courts.”

The article was published shortly before the Nov. 13 attacks in Paris, but after the reported drone killing of ISIS’ “Jihadi John” (Mohammed Emwazi), BuzzFeed reported. The article’s timestamp says Nov. 13, around 10 PM British time.

But where did the “Jihadi Jez” quote come from? Huffington Post noted: “It appears the ‘Jihadi Jez’ quote was entirely unattributed, other than to Corbyn’s ‘critics’. Both Conservative and Labour MPs critical of Mr Corbyn are quoted in the article. But none of these are cited as saying the exact words used in the headline.”

The link to the article, headlined “Jihadi Jez Under Fire from His Own Side,” now leads to an error page. A search on Google for Jihadi Jez still produces the article.

More than 52,000 people signed an online petition calling for the headline to be removed and Sky News to apologize.

“To equate the labour leader with a terrorist who zealously murdered innocent people is not just an insult to Jeremy Corbyn, but it is an insult to all of Emwazis victims, some of whom have expressed similar sentiments regarding a preference for trial, as those articulated by Jeremy Corbyn,” the petition reads in part. “We demand Sky News remove this disgusting tasteless headline instantly, followed by an apology for the frivolous and disgraceful use of the term jihadi in this way.”

In an update to the petition after Sky News took the article down, petition starter Michelle Ryan noted that Sky didn’t apologize and called for those upset by the article to cancel susbscriptions to Sky News and complain to UK broadcast regulator OfCom.

The Sky News article was published around 10 PM on the 13th, not 8 PM as originally stated.

How the Guardian decides to call an attack 'terrorism'
UK Coronavirus Deaths, Language Ban, Deaths outside of hospital, and COVID-19 Photo Caption fail...