Jimmy Kimmel’s Sochi Prank Cried Wolf, Used Lies To Discredit News Outlets, and why was ABC News in on it? 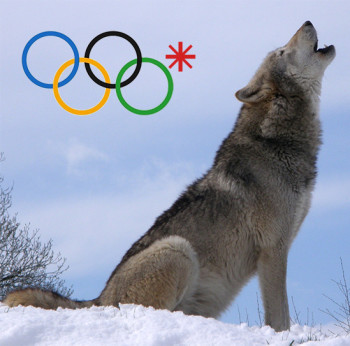 Many news outlets were hoaxed by a Jimmy Kimmel prank video of a wolf in Sochi. But, adding a twist to the hoax, ABC News knew the video was a hoax taken from its own network’s late night program Jimmy Kimmel Live but did not “steer other news organizations away from it,” according to the Associated Press.

Kimmel conspired with a USA athlete, Kate Hansen, having her tweet a video of a wolf allegedly roaming her hotel hallway in Sochi.  Hansen even “confirmed” the video as real, a barefaced lie sponsored by Kimmel, further duping news outlets, according to the AP.

Further, a Kimmel spokesperson withheld comment on the video when it first was rumored he was involved. According to BuzzFeed, “a spokeswoman for Jimmy Kimmel Live told BuzzFeed she could neither confirm nor deny whether the photo was a hoax or if Jimmy Kimmel’s team was behind it.”

News outlets hoaxed included New York Magazine, the UK Metro, Washington Post, and Huffington Post. Those outlets all published updates admitting that they were taken in by the prank.

Earning themselves props, editors at the AP, which eventually reported on the hoax once it was revealed, wrote that it didn’t report on the video because it couldn’t verify it.

Bill Wheatley, a former NBC News executive and current journalism professor, told the AP that “It’s not a great situation when a network television program is staging a hoax that victimizes the credibility of other news organizations. That’s really dopey.”

A Hoax in Wolf’s Clothing

The video was first exposed as a hoax by Inside Edition and later on Kimmel’s show.

After the video was exposed, Kimmel and Hansen discussed pranking the media and world on his Feb. 21 Jimmy Kimmel Live.

Kimmel even somewhat boasted about his tricking the public and of how quickly the hoax spread. “Within minutes of Kate posing it almost every news and sports website had a story on it. Even Weather.com had a story on it.”

Kimmel confirmed that “we shot the video and Kate Hansen posted it for us.” iMediaEthics asked the U.S. Luge Association if Hansen was paid for working with Kimmel. USA Luge Director of Marketing and Sponsorship Gordy Sheer said he was “not sure.”

“A media frenzy was born,” he said, showing a clip of news outlets including CNN, NBC and Fox affiliates reporting on the wolf story as if it were real.

See below the video.

Because Hansen lied twice  — first by posting the video and then by confirming the video as real — the hoax is particularly tricky.

For example, NBC’s Today show reported on it Feb. 20 after getting confirmation from Hansen the video incident was real, the AP reported. It later admitted being duped.

The next day, Today correspondent Willie Geist reported “We’re here to admit humbly that yesterday we were had by the great Jimmy Kimmel.”

Geist explained that NBC did try to fact check the video and even got confirmation. He said:

“Now, in fairness, we called Kate yesterday before the show and asked her about this, yeah, she said, ‘It was me.’ She said ‘I thought it was a dog, it might have been a wolf.’ She said ‘It was sketchy either way.’ She confirmed the story. She was in on the prank.”

Matt Lauer then added, “So she’s sketchy either way.”

USA Luge’s Sheer told iMediaEthics by e-mail, “As far as we are aware, she confirmed the story as real to the Today show on NBC, though we have not confirmed this with Kate.”

See the video of NBC’s comments below.

ABC News defended not letting news outlets in on the joke by saying it was “comedy.” But, in fact, it had become a news story and Kimmel bragged that it had appeared all over the news.

“The world is seeing these kinds of videos more and more, and every news organization has to do its own reporting and own vetting to decide whether or not they want to print, air or say something.”

Of course, he glosses over the fact that Hansen doubled down on the hoax by confirming it, the hoax was harder to dispel.

iMediaEthics asked if there will be any punishment for Hansen for participating in the hoax. USA Luge’s Sheer told MediaEthics that it wasn’t aware of the prank in advance and, “We are still discussing any possible consequences internally.”

Poynter’s Kelly McBride explained to the AP that because Hansen confirmed the video, news outlets can’t be given the full blame for being duped. “News organizations that contacted her, they didn’t do anything wrong,” she told the AP.

USA Luge CEO Jim Leahy responded to the incident in a statement to USOC CEO Scott Blackmun that was sent to iMediaEthics by USA Luge’s Sheer. Leahy’s statement reads:

“On behalf of the United States Luge Association I want to sincerely apologize for the serious lack of judgment by one of our athletes, Kate Hansen.  I know that she got caught up in the ‘Jimmy Kimmel’ hype…but understands now the security breach she caused. Being in Sochi for more than a week I personally witnessed the pride and professionalism provided our traveling party by the many volunteers, security personnel and staff of the Russian Organizing Committee.  With everything else you are dealing with, this ‘prank’ caused unnecessary angst for all involved.  Please pass on my apologies to all the various agencies pulled into this unwarranted stunt.”

International Olympic Committee spokesperson Mark Adams told the Los Angeles Times there didn’t seem to be “any harm done” with the prank video. “I don’t think it’s anything serious.”

However, it did have serious implications besides setting up the news media with lies likely further cementing the public’s annual increasing distrust.  Hansen said in a video interview broadcast on Kimmel’s show that “security started freaking out ’cause technically it’s a breach within athlete safety.”

Sending security on false alarms is dangerous in itself as it becomes unavailable when needed in a true emergency.

“Honestly, there was a little bit more backlash than I thought there would be, but it was all worth it in the end,” she said to Kimmel Feb. 20.

Sports news site SB Nation suggested a few ways to have spotted that the wolf video was a prank or hoax, including that Hansen labeled it  “Epic #SochiFail.”

iMediaEthics has written to Sochi 2014 and the US Olympic Committee for comment. We’ll update with any additional information.

Jimmy Kimmel’s Sochi Prank Cried Wolf, Used Lies To Discredit News Outlets, and why was ABC News in on it?