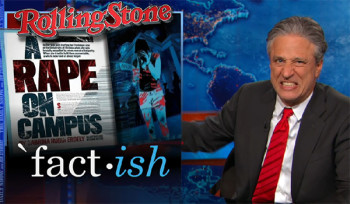 Jon Stewart often takes the media to task for its bad reporting, but the Comedy Central host of the Daily Show slammed Rolling Stone for its failures in its “Rape on Campus” report by Sabrina Rubin Erderly.

Columbia Graduate School of Journalism’s investigation and press conference on the Rolling Stone story made its way to Stewart’s segment last week as he repeated the question many journalists have in recent days — why isn’t Rolling Stone firing or penalizing any journalists?

“How can there be no consequences for an error of this magnitude?” Stewart asked, responding to Rolling Stone  publisher Jann Wenner’s argument that the report serves as a punishment. “The report is not punishment at all!” countered Stewart. “This isn’t a gap or a brain fart or a whoopsidaisy, This is a big deal.”

“This is monumental f**k-up territory,” Stewart added with salt.

“In a sea of verifiable assaults, you managed to ‘Where’s Waldo’ the only rape story that not only would fail to get the point across but set the cause back,” he criticized Rolling Stone.