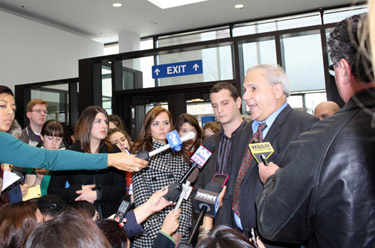 Student reporters working in Northwestern University’s Medill Innocence project received a show of support January 11 from a group of over a dozen professional newspapers and news organizations.

McKinney had been sentenced in 1981 as a 20 year old to spend the rest of his natural life in prison for the murder of Donald Lundahl, iMediaEthics reported last fall. But an investigation by student reporters working in the Innocence project uncovered enough evidence to convince Judge Diane Cannon in Chicago to give his case another day in court.

During the “discovery” phase of the case, the Cook County state’s attorney subpoenaed a large amount of information from Innocence Project, including student grades and records, email communications, and unpublished notes. Professor David Protess, director of the Medill Innocence Project has refused to provide that material, arguing the students were acting as journalist and should be protected under the Illinois shield law for journalists.

Monday marks the deadline for the project’s lawyers to respond to the prosecutors’ argument that the students were operating not as journalists but as an “investigatory” agency. The Tribune reports that Northwestern attorneys filed this response brief Monday reiterating their argument that Innocence Project team members are journalists, and calling for the subpoena to be thrown out.

According to the Tribune, the filing by the group of news organizations is meant to support Medill’s assertion that the students should be protected as journalists. They quote the media group’s attorney, David Sanders, of the Chicago-based firm of Jenner and Block saying “The point of the (filing) is to explain to the court the importance that a large number of journalism organizations give to the position that Northwestern and Mr. Protess are taking here.”

In November, the state’s attorney’s office elaborated on their reason for subpoenaing student’s records and grades, and argued that the students may have paid sources for their testimony. The prosecution seems to believe that they might find evidence in student grades and notes that the reporters felt they would receive higher grades for producing evidence in support of the project to exonerate McKinney, and that they may have enticed sources.

According to the New York Times, “The prosecution argued in a brief… that the school “conducted a private criminal investigation by using students in a journalism class” and further said that during their three years of work on the case, the students had paid witnesses money, flirted with them and, in one instance, flashed a shotgun.”

One Medill witness, Anthony Drake (who admitted to student investigative reporters that he was at the scene of the murder and that McKinney was not) did receive cab fare from the project, which the prosecutors argue he used to buy drugs. The NY Times reported that, “According to the brief, ‘this evidence shows that Tony Drake gave his video statement upon the understanding that he would receive cash if he gave the answers that inculpated himself.’ So in essence, the prosecution holds that a guy implicated himself in a murder case for cab fare,” they write.

However, the Times writes, “On its Web site, the Innocence Project has on-the-record statements from seven people who say that Mr. Drake confessed to the murder.”

A previous NY Times report on the case quotes Professor Protess arguing students had no reason to expect better grades for uncovering witnesses to McKinney’s innocence rather than his guilt, and explaining that Medill Innocence Project students have twice in the last four years found a subject of their investigations was rightfully convicted guilty.

According to a Medill report, the brief issued by the group of professional newspapers Monday in support of the students “asserted that Medill student journalists are protected by the Illinois Reporter’s Privilege Act and argued those rights are not different than reporters at mainstream news organizations.”

Sally Daly, a spokesperson for the Cook County state’s attorney told the NY Times “Our position is that they’ve engaged in an investigative process, and without any hostility, we’re seeking to get all of the information they’ve developed, just as detectives and investigators turn over.” Protess, and the papers supporting the project assert that the students are not “detectives” or “investigators,” but journalists.

Illinois shield law restricts protection to “reporters” and defines a “reporter” as “any person regularly engaged in the business of collecting, writing or editing news for publication through a news medium on a full‑time or part‑time basis.” The prosecution has argued that because student journalists in the Medill Project didn’t publish their reporting themselves, they’re not protected.

The November filing by the prosecution in response to Medill’s call to quash the subpoena, argues “The Innocence Project is not in the business of making news that will result in publication via a news service.” However, reporting work by the students was in fact used in a published piece of journalism–by Maurice Possley, in the Chicago Sun Times. The group also publishes findings on the Medill Innocence Project website.

The brief filed Monday by attorneys for Northwestern cites several cases where investigators of various kinds were found to be protected under Illinois shield law, and asserts “Stories based on [student] work have appeared in the Chicago Tribune, the Chicago Sun Times, CBS News… Rolling Stone, and Newsweek, among others.”

Judge Cannon accepted both briefs–from the University, and from the group of News organizations in support of the students–along with another support brief from The Student Press Law Center, according to the Medill report. February 10 has been set as the next status call in the case.