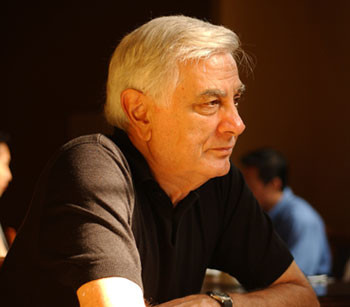 The book, Blur: How to Know What’s True in the Age of Information Overload, focuses on the importance of verification, fact-checking and evidence in media — whether it be traditional newspaper media or an online blog.

The authors, Kovach and Rosenstiel, each have decades of experience in the journalism industry.  Kovach, a former New York Times Washington bureau chief and editor of the Atlanta Journal-Constitution, is currently the founding chairman of the Committee of Concerned Journalists and a senior counselor for the Project for Excellence in Journalism.  Rosenstiel, a media critic and author, founded the Project for Excellence in Journalism and works with the Pew Research Center.

iMediaEthics spoke with Kovach by phone last week about their new book.

iMediaEthics:  Blur seems to be written both for journalists and a general audience.  Who is the audience for the book?

Kovach:  “Tom Rosenstiel and I have done three books together now.  This is the third, and all three of them were designed for both purposes – both for journalists who are in the process of transitioning to a new kind of journalism because of the impact of the communications technology revolution, which has undermined the economic model of old journalism, and the massive audience that the new communications technology has made.”

“The separation between journalists and citizens is slowly disappearing.  I mean, anyone, anywhere can be a reporter of the next big news incident.  Anyone can be a reporter now, and in terms of the information citizens need because they have access to the online presentation of information from hundreds of sources, they are becoming their own editors.  So it’s imperative that we both help journalists understand this change…and citizens understand how they can determine what they can believe in.”

iME:  How is this book different from Elements of Journalism?

“But 2007, 2006, things had changed so radically in terms of how journalism was now appearing on the internet in hundreds of thousands of forms.  As we worked through the book chapter bychapter revising, updating, trying to make it more relevant to the current conditions, we realized it was going to take more than a revision of  the Elements of Journalism to cope with …”

Blur is, therefore, “a book that is not just aimed at journalists, but at the general public because they are… becoming their own reporters,” Kovach said.

iME:  What are the new, important ideas put forward in Blur?

Kovach:   “We’re trying to put it in a framework that helps people build in their minds a process of analyzing information quickly. The same way, as you noticed as you read the book, we introduced each idea by telling the story of telling a story of a great journalist or a great truthseeker and how they went about their business — their skeptical way of knowing, their challenging of information all the time — and we tried to describe that process for citizens so they can do the six-step method.”

“It’s that simple question – how did he know that – that you have to ask all the time because the media now is available to anyone to pour information into it. And in that world, we all have to be careful that it’s not someone who is providing information in a form that looks like journalism that isn’t designed to inform but is designed to mislead us, to propagandize us…”

iME:  You identified four models of journalism in the book.  Is any of those models better than the other?

Kovach:  “Journalism of verification is … a news system that provides citizens documented information on which they can make informed decisions in the social, political and economic marketplaces that they live in.  That’s the purpose of journalism is to do that, to have citizens make the kinds of informed decisions that they need to make.  If that does not survive, then the whole notion of democracy begins to disintegrate.”

“Democracy is based on an informed citizen, an informed collective.  The whole notion of public opinion on which democracy is based grew out of the invention of the printing press.  That, for the first time, gave ordinary people information about the behavior of people in the institutions that had power of their lives.  Once they had that information, they had a chance to have a voice on how those people in those institutions behaved. That’s what created public opinion, that’s what created democracy.  The two were born together, the two will die together.  In that sense, journalism of verification is the key to the survival of democracy.”

But, overall, the journalism of verification is “the one we’re most concerned about,” Kovach said.

Kovach and Rosenstiel call social media, aggregating and blogging “forms of communication or activities — not models of content.”

According to Kovach and Rosenstiel, “technology may change the delivery and form” of news and information, but not “the imperatives of what people need to know” (page 173).

“Journalism must shift from being simply a lecture — telling the public what it should know — to becoming a public dialogue with the journalist informing and helping facilitate the discussion” (Page 175).

“The Internet is not only creating a new journalism; it is creating a better one that can dig deeper and better engage with the public” (Page 184).

Kovach and Rosenstiel also questioned if the public should “care about the old news institutions?”  Noting that many newspapers have “died,” they suggested “perhaps we shouldn’t” care.

“History repeatedly offers evidence that innovation is more likely to spawn in small places than large, in garages (Apple and Hewlett-Packard) and grad school carrells (Google), in a founder’s unlikely vision rather than a Fortune 500 corporation’s task force (Page 194).

“The question is whether, and to what extent, these values of independent and reliable journalism will transfer to new institutions.”