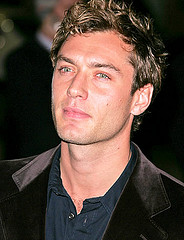 Actor Jude Law has filed a lawsuit against News Corp.-owned daily newspaper The Sun alleging the newspaper hacked his phones, DAWN.com reported.  Law alleges the newspaper based four articles about him from hacked voicemails. The articles were published in 2005 and 2006.

Law filed a lawsuit against the News of the World for phone hacking earlier this year.  His case will be tried starting in January, according to a May 2011 Reuters report..

The News International issued a statement about the lawsuit:

“We believe this is a deeply cynical and deliberately mischievous attempt to draw The Sun into the phone-hacking issue. The allegations made in this claim have been carefully investigated by our lawyers and the evidence shows that they have no foundation whatsoever.”

“In particular, the claimant’s solicitors have relied on a reference in documentation that they should be well aware has nothing to do with a case against The Sun… Also, another article complained of merely reiterated information which was already in the public domain. The claim will be defended vigorously.”

The Independent noted that Law’s lawsuit “is the first time that The Sun has been named in civil proceedings brought by public figures who were targeted by the private investigator Glenn Mulcaire.”

According to MondoTimes, The Sun is a daily newspaper with a circulation of almost 3 million copies.

Milly Dowler is the teenage girl who was murdered in 2002.  News of the World hacked her phone in the days after she first disappeared and deleted her voicemails.  News of the World closed within a week of the Dowler hacking being revealed by The Guardian.

His resignation came the same day as Rebekah Brooks’ resignation as News International CEO.  Hinton “preceded Brooks as the executive chairman of News International during the same years News of the World was allegedly hacking into the voicemails of British celebrities and politicians, as well as a murdered teen girl and the father of a bombing victim,” according to Bloomberg.

Murdoch issued a statement on Hinton’s resignation praising Hinton’s work for News Corp. and stating that ‘News Corporation is not Rupert Murdoch.”

Murdoch’s statement and Hinton’s resignation letter are both published here on All Things D.

Hinton, who “left News International in December 2007,” added that he thought “the rotten element at the News of the World had been eliminated” and that he didn’t know of hacking beyond Clive Goodman.

Hinton stated in his resignation letter to Murdoch that he has “watched with sorrow from New York as the News of the World story has unfolded.”   He commented:

“That I was ignorant of what apparently happened is irrelevant” but was resigning because it was “proper” given “the circumstances.”

Actor Hugh Grant has filed a lawsuit against UK police, Mediaite reported. According to Mediaite, Grant has expressed “Regrets [for] starring in the 1995 film Nine Months, because it was distributed by 20th Century Fox,” which is owned by News Corp.

As iMediaEthics has previously reported, Fox News and other U.S.-based News Corp.-owned media outlets have been criticized for their soft coverage of the phone hacking scandal.

But, the segment, hosted by Steve Doocy and featuring a PR professional Bob Dilenschneider as guest, has been criticized for  comparing the voicemail hacking to the hacking of websites by hacking groups like Anonymous and the former LulzSec.

Mediaite described the segment as “about as bungled as you could possibly imagine.” According to Mediaite, the Fox News segment attempted to “dismiss” the scandal.

“So, let me get this straight. A News Corp. outlet has admitted to hacking into citizen’s phones and has been accused of bribing politicians and police and this is the same thing as other companies being the victims of computer hackers?! How on earth did you get there?”