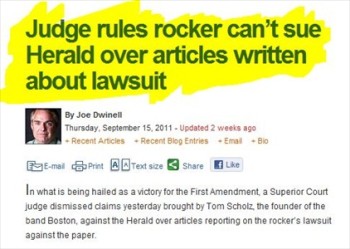 The newspaper then reported last year on his libel charges and lawsuit, over which Scholz then filed lawsuits alleging defamation and infliction of emotional distress, the Herald reported.

While that second lawsuit wasn’t upheld because the judge, Superior Court Judge John C. Cratsley, decided that they “accurately reported on the litigation,”  in appeals Cratsley again ruled against Scholz.

However, Scholz still is suing for the original defamation charges.