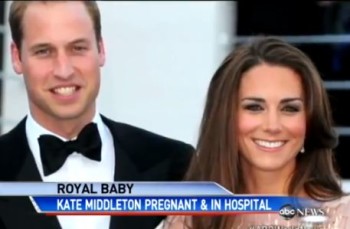 Fall out from a now high-profile prank phone call from an Australian shock jock radio program has led to two suspensions and an apparent suicide.

Australian radio hosts Mel Greig and Michael Christian from 2Day FM called King Edward VII Hospital this past week posing as Prince WIlliam’s father, Prince Charles, and grandmother, Queen Elizabeth, trying to get information about Kate Middleton’s pregnancy, which had been confirmed by the palace to explain her several-day stay at the hospital. Nurse Jacintha Saldanha patched the two through to a nurse at the hospital; just days later, Saldanha was found dead of an apparent suicide.

The hospital’s chief executive John Lofthouse gave a statement confirming Saldanha, who he said “was recently the victim of a hoax call to the hospital,” had died, the New York Times noted. Her death has been described as a “suspected suicide,” but the Associated Press reminded readers that police haven’t officially declared it a suicide, or that is was connected somehow to the hoax phone call, writing:

“Police have made no connection between her death and the prank call, but people from London to Sydney have been making the assumption that she died because of stress from the call.”

St. James’s Palace issued a Dec. 7 statement about Saldanha’s death, saying they were “deeply saddened,” commending how “wonderfully well” the hospital treated them and noting it didn’t file any complaints with the hospital, the AP added.  2Day FM’s parent company, Southern Cross Austereo, also issued a statement about the nurse’s death noting that the pair were “deeply shocked” and won’t “comment about the circumstances.”  In an apparent mutual decision, the pair have been removed from the air “until further notice out of respect for what can only be described as a tragedy.”  Further, the company’s Chief Executive Rhys Holleran commented that Saldanha’s death was “a tragic event that could not have been reasonably foreseen.”

According to The New York Times, 2Day FM has unpublished from its website and YouTube account “audio of the prank phone call.” Likewise, the BBC apparently unpublished its copy of the audio, noting in a Dec. 7 update to one of its stories it had “edited” the story “to remove the audio of the phone call.”  iMediaEthics has asked the BBC for more information about why it unpublished the audio and will update with any news.

This isn’t the first time 2Day FM has gotten in trouble, the Daily Beast reminded. Three years ago, 2Day FM’s “The Kyle and Jackie O Show” was pulled off the air for a few weeks after it “got a 14-year-old girl to admit that she had been raped after strapping her to a polygraph machine while her mother quizzed her about her sexual activities.”  Because of that incident and last month’s ACMA ruling that the station’s Kyle Sandilands’ describing someone as a “fat slag” last month, 2Day FM is “serving two five-year license probations.”

iMediaEthics wrote to the Australian Communications and Media Authority seeking information about any complaints or investigation over the prank call. Emma Rossi from ACMA told iMediaEthics by email that the group has gotten complaints over the prank, “but the number is not relevant as we only need one valid compliant to open an investigation.” She added that she “can’t confirm whether we are planning to open an investigation,” but that ordinarily, ACMA has complainants try to “resolve” their complaint with the outlet in question, but “if after 60 days that hasn’t happened, they come to us.”  Rossi pointed to ACMA’s website and statement about the prank call.

That statement, signed by Rossi, calls the nurses’ death “a tragedy for all involved” and noted that

“The ACMA does not propose to make any comments at this stage, but will be engaging with the licensee, Today FM Sydney, around the facts and issues surrounding the prank call.”

2Day FM’s prank call isn’t the only hoax stunt that has had serious repercussions lately.  Last month, Kyrgystan public television host Nazira Aitbekova held a press conference and “filed a complaint” after she said two fellow Kyrgyzstan journalists kidnapped her, made her “partially undress, and threatened to kill her” before admitting it was a prank.  The two journalists, who weren’t named in Radio Free Europe Radio Liberty’s report, were fired and their newspaper’s owner, Shaita Shatmanova, said

“The journalists were told by the editor and chief editor not to scare [her], not to endanger her life, and not to step over the line…In this case, our correspondents acted according to their own decisions.”

And, iMediaEthics wrote earlier this year when New York City Spanish radio station WSKQ was fined by the Federal Communications Commission for a prank phone call posing as a hospital notifying a woman her husband was “seriously injured.”

iMediaEthics has written to 2Day FM’s parent company asking for more information about the suspensions and the “license probations,” the decision to unpublish the audio from the web, how this incident will affect 2Day FM, and who approved the prank call. We’ll update with any response.