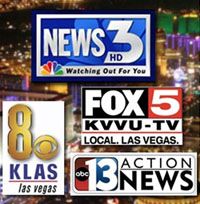 Logos of the Las Vegas TV Stations involved in a dispute over alleged "payola" schemes.

During this summer’s recession, while news outlets were struggling to make ends meet, three TV stations in Las Vegas might have actually sold out. A TV news station, KVBC-TV, NBC Channel 3 News in Las Vegas is accusing three competitors of cashing in on an unethical (and illegal) arrangement.

According to the Las Vegas Review-Journal, KVBC-TV “filed a complaint with the Federal Communications Commission” against KVVU-TV, FOX 5 News Channel 5; KLAS-TV CBS Eyewitness News , Channel 8; and KTNV-TV ABC 13 Action News, Channel 13, “charging that the stations sold airtime to an advertiser inside their newscasts and used reporters to conduct interviews presented as objective news stories without disclosing that the segments were purchased.”

The three stations in question allegedly produced what appeared to be news segments on the liquidation of cars at Chrysler dealerships that were being shuttered by the Chrysler Corporation at the beginning of the summer, from May 22 to June 22, 2009. KVBC says that its competitors were paid by Arrowhead Advertising to produce the coverage.

How did KVBC know that the other three were airing ads as news? Because they had been offered the same deal and turned it down. According to the Review-Journal, “The complaint claims that in May, KVBC account executive Christy Haldeman was told by an Arrowhead representative that ‘if you cannot guarantee the news coverage, you won’t get that buy.’ It further claims that Arrowhead again attempted to gain news coverage for another client, United Nissan, emphasizing that the station missed out on the first deal because of its ‘news coverage stipulation.'”

Placing paid content in a news broadcast without full disclosure at the time of broadcast violates the FCC’s Payola rules.

The three stations are denying all accusations and the owner of Arrowhead Advertising, Kyle Eng, told the Review-Journal that the charges are “unequivocally false.”  He went on to argue that, “During that time, the government shut down 789 Dodge and Chrysler and Jeep dealerships, so we didn’t have to ask for coverage. It was one of the biggest stories of the year and we were getting calls from news directors left and right.”

But it is precisely because of the number of auto failure stories that this alleged arrangement could have been easily disguised and thus even more duplicitous and misleading for viewers.