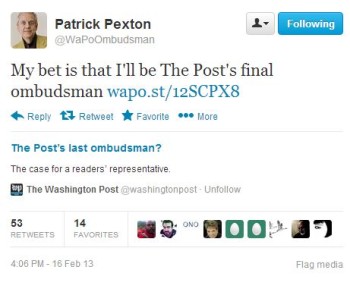 It looks like the Washington Post’s ombudsman office might actually end up “empty” after all. As iMediaEthics wrote earlier this month, Washington Post editorial page editor Fred Hiatt indicated in an interview with The Washingtonian that the ombudsman position would be changing, but the Post didn’t offer much in terms of concrete details about its plans for the future.

And now, Washington Post ombudsman Patrick Pexton, who has just about a week and a half remaining on his term, devoted his Feb. 15 column to discussing the future — or lack thereof — for the ombudsman job at the newspaper and to “make the case for an ombudsman.” He commented:

“It is possible that I’ll be The Washington Post’s last independent ombudsman and that this chair will empty.”

While Pexton noted that “Officially, no final decision has been made,” he conceded that “for cost-cutting reasons…my bet is that this position will disappear.” As Pexton explained,  Washington Post executive editor Marty Baron acknowledged the “value in having someone internally” to deal with complaints, but said that with all the other ways the Post can get reader criticism, they don’t have to pay someone to handle the criticism. Pexton quoted Baron as saying:

“There is ample criticism of our performance from outside sources, entirely independent of the newsroom, and we don’t pay their salaries.”

Pexton tweeted later to add a “clarification” that it’s “not fair to put it all on” Baron if the position is axed.  Pexton’s tweets are below:

One clarification on my Sunday column wapo.st/12SCPX8 Post Exec Editor @postbaron is not the only decision maker on fate of ombudsman

2. Decision on future of ombudsman is more of a collective decision among senior Post newsroom and other executives.
— Patrick Pexton (@WaPoOmbudsman) February 18, 2013

3. Not fair to put it all on @postbaron and if it comes across that way in column, my apologies to Marty.

But, citing the “average of 5,000 emails alone per month” he and his assistant deal with and the sheer amount of work on reporters’ plates which could prevent them from handling reader responses, Pexton argued that the ombudsman office is “earning our salaries in saved subscriptions.”  As such, Pexton called

“An ombudsman, then, is often the newsroom’s backstop. I can get to the bottom of most problems and give a straight answer without fear or favor.

“Can I say for certain that an ombudsman makes The Post more credible? No, I can’t point to any good study saying that. But people’s trust in the media is declining. Eliminating the ombudsman seems a shortsighted move.”

iMediaEthics wrote to the Washington Post asking when the newspaper will announce what’s going to happen to the ombudsman job, but Post spokesperson Jennifer Lee said in an email to iMediaEthics yesterday that “we have nothing to share at this time.”

Pexton’s predecessor Andy Alexander told Media Matters that getting rid of the position “would be widely interpreted, fairly or unfairly, as The Post using financial pressures or other reasons as a pretense to get rid of an internal critic.”  Alexander continued:

“From the outset, the role has been to provide readers with access to an independent agent empowered to investigate charges that The Post has not lived up to its high journalistic standards…there is a huge difference between an ombudsman who merely reflects what readers are saying, as opposed to an ombudsman who has the independence and authority to ask uncomfortable questions of reporters and editors and then publicly hold the newsroom to account.”

Further, Geneva Overholser, a Post ombudsman in the ’90s, commented to Media Matters “If the paper is mainly doing this to save money it will be a real shame and a big mistake.”