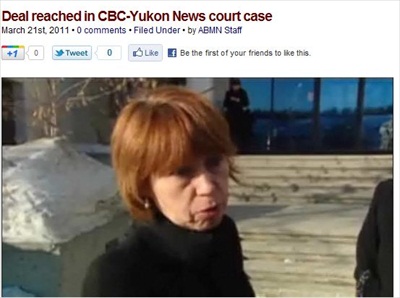 Yukon News, CBC Radio and a Canadian physician agreed to a consent order so a radio reporter won't have to reveal her sources. (Credit: ABMN)

The newspaper, the Yukon News, called for reporter Nancy Thomson of radio station CBC Radio to identify for the News her anonymous sources in a 2004 report, so the News could use those sources to defend itself in a defamation lawsuit. The case would have been a precedent-setting one as “the first time in Canadian history that one news organization took another to court to reveal anonymous sources.”

Thomson had 11 sources for her report on prescription drug abuse in the Canadian town Watson Lake.  So far, two have been identified: One of them died and the second was “charged with second-degree murder.”  Her report also named physician Said Secerbegovic.

The Yukon News wrote an editorial about Thomson’s report, also naming Secerbegovic.  Secerbegovic filed a defamation lawsuit against the News for its editorial — but not against Thomson for her report.

The settlement that was announced this week was actually arranged last week on March 18 and agreed to by CBC, Yukon News and Secerbegovic, according to Yukon News publisher Steve Robertson.  Robertson e-mailed StinkyJournalism the consent order.

As part of the settlement, the News has to pay CBC’s legal costs.  Instead of outing Thomson’s sources and having them testify, Thomson will testify on their behalf at the defamation trial.  The lawsuit, which is set to start May 9, is between the News and Secerbegovic.

StinkyJournalism e-mailed CBC’s attorney in this case, Fred Kozak, to see if CBC and Thomson will be involved in this case going forward outside of Thomson’s testimony.  He responded via e-mail: “Apart from providing our broadcasts that aired in 2004, our hope is that neither CBC nor Ms Thomson will have any further involvement in this litigation.  She may not have to testify at the trial either, but if she does, the order makes it clear that she will not have to disclose source identity.”

If the News, CBC and Secerbegovic hadn’t been able to agree, Thomson indicated she intended to “fight” any order for her to out her sources. Thomson “could have faced contempt of court,” reported American Banking News.

“I have a great respect for the judiciary, the Canadian judiciary is highly regarded internationally, and I wasn’t relishing the prospect of disobeying the judiciary, but I would have fought if I’d had to,” Thomson reportedly said after the settlement.

Thomson also is quoted as saying: “It’s very good.  I mean, I would be hard-pressed to do my job at all if I was not able to protect sources.”

The Yukon News’ Robertson told StinkyJournalism via e-mail:  “I am happy with the outcome as trying to compel the CBC reporter to reveal her sources was not how we wanted to proceed. It is innovative in that it will allow hearsay testimony to be heard by the jury. (An aside, it will be the first civil jury trial in the territory in 15 years.)”

Fred Kozak, an attorney representing the CBC, commented to CBC: “We were able to assist, I think, in identifying ways in which the appropriate facts could be put before the court without having to imperil Nancy Thomson or her sources.”

In response to iMediaEthics’ e-mail request for comment, Kozak wrote: “Investigative reporters will always do whatever is necessary to protect the identity of confidential sources.  That can be achieved in a variety of incremental ways:  in this case, we  convinced the litigants that there were other ways to establish facts relevant to the defamation trial between Dr. Secerbegovic and the Yukon News.  Compelled disclosure of source identity erodes public trust for journalists everywhere, and ultimately undermines effective newsgathering. For an investigative reporter, there is no more important issue.”

iMediaEthics wrote in October about the case.

UPDATE: 3/24/2011 10:26 AM EST: The Yukon News’ Steve Robertson told iMediaEthics that next up in the defamation case is an April 4  “judicially supervised settlement conference” and the May 9 – May 20 libel trial.