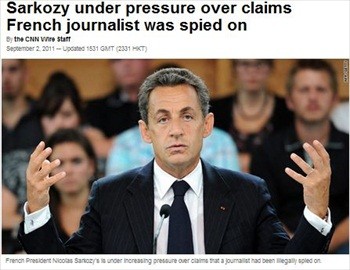 French newspaper Le Monde has alleged that French president Nicolas Sarkozy’s secret services “spied on one of its journalists to uncover its sources,” the Guardian reported.

The newspaper, among the most respected dailies in Europe, published a front-page editorial, which the Guardian called “scathing,” that claimed the French government had a practice of “tracking of journalists” and searching reporter’s phone records.

According to Le Monde, “an investigating judge had uncovered documents ” indicating French intelligence groups called for Le Monde reporter Gerard Davet’s “detailed phone records” last year.  From those files, “state spies” reportedly claimed to have determined who one of Davet’s sources was and then “swiftly demoted” that person and sent him to French Guiana.

That source reportedly had leaked “information about a judicial investigation into a case involving labour minister Eric Woerth and L’Oréal heiress Liliane Bettencourt.”  As CNN explained, the incident is “linked to a scandal known as the Bettencourt affair, involving the finances” of Liliane Bettencourt and “allegations of possibly illegal political donations to Sarkozy.”

The BBC reported that the French government “confirmed the country’s secret service obtained phone records ” of Davet. According to the BBC, Sarkozy’s office denied that it tried to find out Le Monde’s sources.

Le Monde reported that both the Judicial Press Association and the Syndicat Nationales de Journalistes joined Le Monde in its complaint.

The International Business Times reported that Sarkozy denied that the newspaper was looking into the reporter and instead claimed that “his government was simply seeking to identify a mole in the Justice Ministry who was suspected of leaking classified information.”

Last year, Le Monde sued over the incident because there is a French law guaranteeing journalists the ability to keep their sources private. StinkyJournalism wrote in September of last year when press freedom advocacy group Reporters without Borders joined Le Monde’s complaints against Sarkozy’s “aides.”

iMediaEthics is writing to Le Monde and the SNJ for comment. We will update with any response.