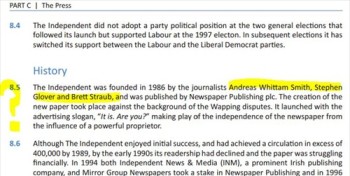 Lord Justice Brian Leveson’s long-awaited report on the UK press standards and practices was released this past week, but the UK Independent spotted an error it claims Leveson made because of Wikipedia.

As the Independent explained, the report lists a person named Brett Straub as one of the newspaper’s founders, which it says is inaccurate.  A paragraph of Leveson’s report reads:

“The Independent was founded in 1986 by the journalists Andreas Whittam Smith, Stephen Glover and Brett Straub, and was published by Newspaper Publishing plc. The creation of the new paper took place against the background of the Wapping disputes. It launched with the advertising slogan, ‘It is. Are you?’ making play of the independence of the newspaper from the influence of a powerful proprietor.”

“This was the only contribution to Wikipedia made from that IP address, which is registered in Pomona, in California. It may or may not be a coincidence that there is a Brett Straub on Facebook who graduated from Cal Poly, in Pomona, and describes himself as ‘a lazy bum like person who loves cars and hanging out with friends and family.'”

iMediaEthics wrote to the Leveson Inquiry asking for more information about this apparent error, the Independent’s reporting that the error was because of Wikipedia as a source and about the fact-checking methods the inquiry staff used while preparing its report. The inquiry’s Head of Communications John Toker told iMediaEthics by email that “The Inquiry has not comment on any of the questions you have asked.”

The Independent was also asked for comment on the error and how it would like to see the error corrected. We’ll update with any response.