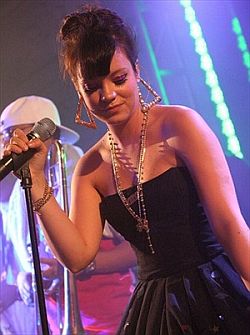 The quotes in question were published in an article called “Les footballeurs courent après tout ce que je deteste” – or as The Guardian translated “I hate footballers.” They labeled Victoria Beckham “a monster” and “Girls Aloud” singer Cheryl Cole “stupid and superficial.”  (Beckham’s husband, soccer player David Beckham, is currently suing both In Touch magazine and a call girl who claimed in an In Touch cover story that he had slept with her.)

According to The Guardian, So Foot “admitted in the high court in London that no interview ever took place” and apologized to Allen.

In a statement, So Foot said it “offers its sincere apologies to the claimant [Allen] for the damage, as well as the upset and embarrassment caused to her by the publication of the article,” The Guardian added.

The Independent noted that the fake Allen interview was labeled “an exclusive, first-person interview.”

Allen has previously won 10,000 pounds from The Sun, which reprinted So Foot’s fake quotes.  The May 7 Sun article, titled “Ranting Lily” (mis)quoted Allen as saying Cheryl Cole was “stupid and superficial” and that her husband, Ashley Cole was “revolting,” The Guardian reported.

The Sun apologized in its Sept. 25, 2009 print edition.  “In May we reported in Bizarre that Lily Allen had made various offensive remarks about David and Victoria Beckham and Ashley and Cheryl Cole in an interview with a magazine. We now accept that Lily didn’t say these things to the magazine and we apologise to Lily for the upset and embarrassment caused by repeating them,” The Guardian added.