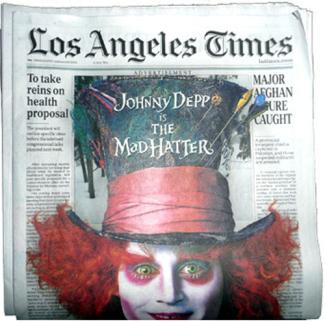 The Los Angeles Times sold its front page as ad space yesterday. Disney paid $700,000, according to The Wrap. The above image shows the fake front page Times readers faced before reaching the actual Times masthead with yesterday's news stories.

In 2008, when a fake newspaper front page made a splash with commuters in New York City, the spoof turned out to be the handiwork of political pranksters wanting to propagate their message about ending the Iraq war. The New York Times, the victim of the hoax, reported, “The spurious 14-page papers — with a headline “IRAQ WAR ENDS” — surprised commuters, many of whom took the free copies thinking they were legitimate.”

On Friday, however, the latest in what would have seemed to be a hoax front page of a major newspaper turned out not to be a spoof produced by political idealists. Rather, it was printed by that very newspaper, this time the Los Angeles Times. CNN reports that the Los Angeles Times‘ “cover-wrap” (a fake version of its front page)  plastered Johnny Depp, wearing his make-up and costume from Disney’s new film “Alice in Wonderland.” The ad, CNN writes, “includes the paper’s traditional flag and two stories that appeared in the paper last month.”

Los Angeles Times spokesman John Conroy couched the stunt to CNN as an “unusual opportunity to stretch the usual boundaries and design an innovative ad designed to create buzz .” But the Disney “buzz” sounds more like an ethical thud to Roy Peter Clark, a senior journalism scholar at the Poynter Institute. Clark tells CNN, “”What offends my traditional sensibilities is the notion that you would be willing to deceive the reader into thinking that this was the actual front page.”

An online search revealed that the article on the left column — headlined “To take reins on health proposal” — was a slightly altered version of a story written by Tribune Co. Washington reporter Noam Levey. It was published February 18.

The second article, appearing on the right column of the Disney ad, was headlined “Major Afghan Figure Caught.” The original story was published February 19, with the bylines of Times foreign correspondent Laura King and Moscow bureau chief Alex Rodriguez.

Clark tells CNN, “If I had written one of those stories, I would be pissed.”

Sharon Waxman, at The Wrap, quotes an interview with Robert Niles, journalist and former editor of the USC Annenberg Online Journalism Review (now defunct). Niles states, “It’s a pretty dangerous road to go down for any news organization to actually sell advertising that covers up your news reporting. It really shows a lack of respect for the audience and a lack of confidence in your editorial product.”

With dark humor, the Not The LA Times Web site provides a set of other possible ads the Los Angeles Times could run on their front page.