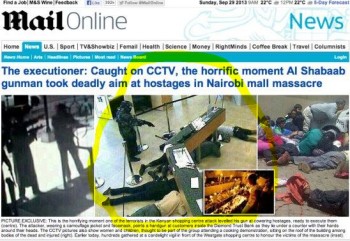 Above, see the Mail's original article on the Kenyan attack. The photo in the middle (circled in highlight) is actually from a 2010 FBI press release on a Miami bank robbery. (Credit: Mail on Sunday via Moon of Alabama, screenshot, highlight added)

The Mail on Sunday used a photo from a 2010 bank robbery in Miami, Florida in its coverage of the Nairobi, Kenya terrorist attack.

The Mail admitted making the error in an Oct. 12 correction published on the Mail‘s website. The correction reads:

“On September 29 we published an image apparently from CCTV of terrorists threatening bank customers at the Nairobi shopping mall. Another news organisation also published the same picture. Regrettably, the image was of a different incident. We apologise to readers.”

The Mail on Sunday‘s managing editor John Wellington told iMediaEthics by e-mail that the Mail tried to fact check the photo beforehand. “Before publication we checked the image with both the Kenyan police and military forces,” he wrote. “Neither gave us any indication that it was not a genuine image from the mall at Nairobi.”

The image in question shows a masked gunman pointed a gun at people lying facedown on the floor. It appears as if the people are in a bank with their heads underneath a counter.

The Mail photo caption reads: “Terror at the mall: A gunman takes aim at the hostages as they lie face down inside a bank at the Westgate shopping centre during the terrorist attack.” The photo carries a copyright label for Keith Waldegrave, who works for the Mail.

iMediaEthics couldn’t find the article in question on the Mail‘s website. A link to the story goes to an error page, and , the article has been unpublished. The Mail on Sunday’s Wellington told iMediaEthics the article was deleted “because it was incorrect.” He added that “We regret publication and have apologised to our readers.”

Blog Moon of Alabama posted screenshots of the original story, and a Google search of the headline produces the Mail story re-published on other sites like Colorado News Day.  Moon of Alabama identifies itself as a blog “to discuss politics, economics, philosophy and blogger Billmon’s Whiskey Bar writings.”

Jerome Starkey, whose Twitter bio identifies him as an Africa correspondent for The Times of London, tweeted about the Mail photo being inaccurate, Moon of Alabama reported.

Starkey’s tweet included a link to an April 16, 2010 FBI press release about a robbery at an Eastern Financial Federal Credit Union.

Moon of Alabama asked the very logical question: “How can a CCTV picture from a public FBI release be copyrighted to a Mail photographer?”

The Mail on Sunday’s Wellington explained to iMediaEthics why:

“Keith Waldegrave is a staff photographer who was in Kenya covering the story. He obtained the image, along with a number of other CCTV images, apparently genuine, from a previously reliable correspondent who had collected them from a source of his own. Keith sent the image to our offices in London and his name was attached in our image database and was published when Mailonline used the picture.”