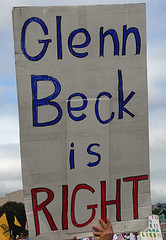 The New York Times and The Washington Post Ombudsmen reflect on their papers slowness to respond to the Acorn scandal. The above protest sign positively features Glen Beck, a Fox News commentator. (Credit: Andrew Aliferis, Flickr)

First the Washington Post’s ombudsman, and now the New York Times’ own public editor have weighed in: Their own papers, they say, have dropped the ball; missing important recent stories breaking on right-wing blogs and conservative media like Fox News.

It took the Washington Post two days after the damning ACORN videos (employees of the national community organization advising a fake pimp and prostitute on their taxes) were released before it first wrote about the controversy.  The New York Times, meanwhile, lagged nearly a week behind in addressing the videos.

On September 20th, Washington Post ombudsman Andrew Alexander explained the Post’s lag time in reporting these stories as a hearing problem: The Post has been “Deaf to Rightwing Media,” he argues.  “…traditional news outlets like The Post simply don’t pay sufficient attention to conservative media or viewpoints.”

New York Times’ public editor, Clark Hoyt, delved into the issue of timing as well on September 26th, saying the Times had “slow reflexes” in addressing the ACORN controversy. When the paper did finally chime in, Hoyt says, it alienated readers by presenting the story with a political frame.

“I thought politics was emphasized too much, at the expense of questions about an organization whose employees in city after city participated in outlandish conversations about illegal and immoral activities,” he says.

Both writers contend that their respective papers need to tune in better. And it looks like they’ll be trying to.  Alexander quotes Post executive editor Marcus Brauchli saying that “he pressed the National desk this week to provide more ACORN coverage.”

The New York Times is going a step further, according to Hoyt: assigning an editor who will “monitor opinion media and brief them frequently on bubbling controversies.”

Timeliness in reporting on these stories should not mean complicity in them, Alexander cautions. Some media outlets like Fox News were criticized for publishing the ACORN videos without vetting the incorrect information they contained (including one ACORN employee’s false statement that she killed her husband.)  “The Post should follow its own news standards, not theirs. But it should pay attention to what they report,” Alexander says.

The danger in continuing to be late to the party for either of these papers, or other big media, is that their tardiness might be construed as bias.  “Some stories, lacking facts, never catch fire. But others do, and a newspaper like The Times needs to be alert to them or wind up looking clueless or, worse, partisan itself,” says Hoyt.