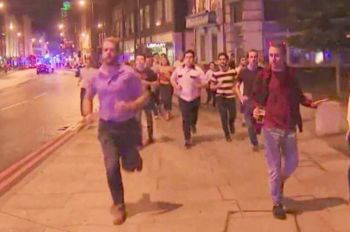 Photos of a man running from the London Bridge terror attack holding his beer went viral in June. (Credit: The Sun)

After the London Bridge terror attack in June, a photograph of a man fleeing with his pint of beer went viral. Several news outlets quoted from the Facebook account of the man’s sister, Katharine Armstrong, who was upset about the comments being published. She complained about this to the UK press regulator, the Independent Press Standards Organisation.

Her Facebook post read, “So that guy with the pint? Yes, that’s the elusive [name]. That’s what happens when you’re a Scouser paying London pint prices.” Armstrong told IPSO that her post was speculation about who was the man pictured, and none of the news outlets actually checked to verify. Armstrong also said her Facebook post wasn’t set to public privacy settings, making it visible to anyone; instead, she set it so only her friends and friends of seven of her friends would be able to see it, a total of as many as 1,358 people. One of the people who was able to see the post was a journalist, according to IPSO.

The Sun declined to comment to iMediaEthics. iMediaEthics has written to the Metro and Mirror for a response to the ruling. We’ve also contacted IPSO to ask if Armstrong has any other complaints against the media coverage of her Facebook post.