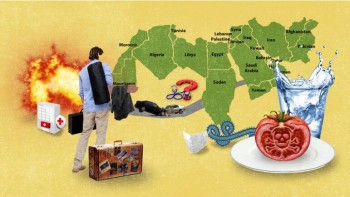 NPR deleted the above illustration because of errors (Credit: NPR via Honest Reporting, screenshot

National Public Radio deleted a map illustration of the Middle East and North Africa that labeled Israel as Palestine and had several other errors, such as the inclusion of Afghanistan and Pakistan.

NPR public editor Jensen explained NPR deleted the illustration and map, which was commissioned by freelancer Patric Sandri for a story “What are you Afraid of in 2016? Globetrotters Share Their Fears,” after the site Honest Reporting, whose mission is self-described as “defending Israel from media bias,” flagged it for “erasing” Israel.

“The original version of this post contained a map illustration intended to represent the countries of the Middle East and North Africa, which poll respondents identified as the region presenting the greatest risk to travelers and expatriates in 2016. The map had a number of errors. The countries of Cyprus, Israel and Turkey were either not shown or not labeled; the label for ‘Palestine’ should have read ‘Palestinian territories’; and Afghanistan and Pakistan were mistakenly included. NPR apologizes for these errors.”

Jensen reported that blog editor Marc Silver admitted NPR didn’t fully fact check the map. “We should have carefully reviewed each map label for inaccuracies and omissions and failed to do so,” Silver is quoted as saying, adding that it was NPR’s fault for letting the errors make it online.

See again the image below. 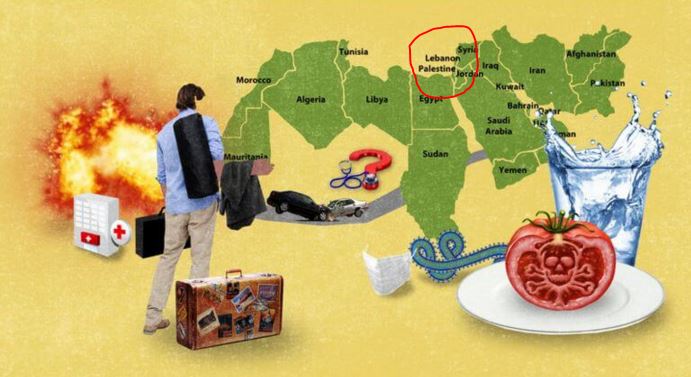 This NPR illustration was deleted because of errors including Israel being labeled as Palestine. (Credit: NPR via Honest Reporting, red circle added)

Sandri, the freelancer, denied the errors were for any “political” reason, instead saying it was because he was working too quickly in order to meet NPR’s deadline. “I had a very short time for creating the illustration,” Sandri told Jensen. “If you work under time pressure mistakes can happen.” Sandri added that NPR did review the illustration and have him make “small changes” but missed the errors as he did.

Honest Reporting, which highlighted the problematic illustration in a story earlier this week, suggested NPR might have been trying to show only Muslim countries, and that’s why Israel was left out. Its managing editor Simon Plosker wrote that “It is completely unacceptable for NPR to publish an image that erases Israel from the map. That nobody at NPR recognized just how problematic this image is on multiple levels speaks volumes about the deficiencies in the editorial process.”

Plosker went on, “NPR should do the right thing and either restore Israel to its legitimate place or come clean and acknowledge that the map, in the context of the article, is meant to signify a fear of the Muslim world.”

iMediaEthics has written to the NPR freelancer Sandri for comment.