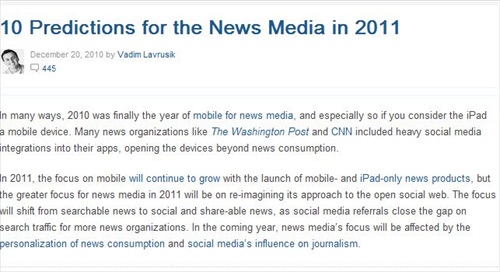 Mashable’s Vadim Lavrusik proposed his ten “predictions for the news media” for the coming year in a Dec. 20 blogpost.

Mashable is a” social and digital media, technology and web culture” news site.  Lavrusik is Mashable’s “community manager and social strategist,” as well as a Columbia Journalism School adjunct professor.

Lavrusik described this year as “the year of mobile for news media,” highlighting traditional news outlets’ move to iPad and mobile applications.

He speculated that the move will only become more significant in 2011.  “The focus [for news media] will shift from searchable news to social and share-able news, as social media referrals close the gap on search traffic for more news organizations,” he wrote.

Some key points from Lavrusik’s proposed changes in media in the coming year included the effects of social media and WikiLeaks.

BBC Misreported on NHS PPE needs because 'misunderstanding' of who anonymous source was
Whoops! The moon isn't a planet