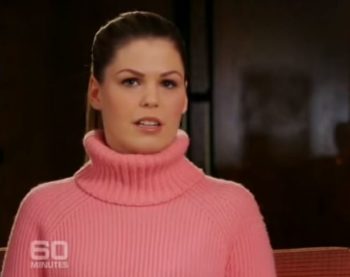 Australia’s Channel Nine paid blogger Belle Gibson $75,000 for an exclusive interview after she was busted for faking brain cancer.

Channel Nine hasn’t confirmed the payment, according to the Guardian, but the $75,000 payment in July 2015 came out in court documents. iMediaEthics asked Channel Nine for confirmation and comment and why this payment wasn’t disclosed to viewers. Channel Nine sent this statement: “The Nine Network has a policy of not disclosing any details of any payment, or otherwise, for any interview subjects on any of its programs.”

Australia’s Consumer Affairs Victoria is investigating Gibson for “unconscionable conduct”and misleading consumers by making money off the fake cancer diagnosis and not donating money to charities, as she said she would. Consumer Affairs Victoria has attempted to fine Gibson but she has not shown up in court four times now, according to News.com.au. Gibson has also not yet mounted a defense.

Consumer Affairs Victoria, a governmental organization, told iMediaEthics it cannot comment on the matter given that the case is “ongoing.”

In the interview last summer with 60 Minutes‘ Tara Brown, Gibson, who started a wellness business after stating “nutrition and holistic medicine” cured her of her cancer, claimed she didn’t know she never had cancer. (The Australian Women’s Weekly reported in April 2015 that Gibson never had cancer, with Gibson confirming, “none of it’s true.”)

“Looking by turns blank and confused – though hardly remorseful – Gibson failed to give coherent responses to Brown about her age and her past throughout the interview, despite being confronted with irrefutable evidence of the facts,” the Guardian reported at the time.