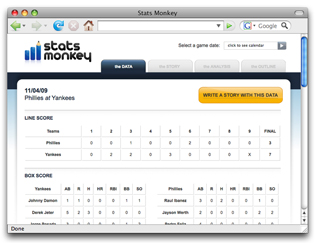 As if the financial and professional climate for journalists wasn’t dire enough, they could soon face some new competition… from machines.

NPR’s All Things Considered reported on a computer program called StatsMonkey on January 10. The artificial journalist is a creation of the Intelligent Information Laboratory at Northwestern University, and can write an accurate report of a given sports game, which approximates the constructions of human thought and composition. Ethical questions have already been raised about the transfer of journalism jobs out of the hands of professionals and into the laps of citizen journalists and bloggers. But what does it mean for ethical journalism that some stories can now be written by computers?

The system is based on two underlying technologies.  First, it uses baseball statistical models to figure out what the news is in the story: By analyzing changes in Win Probability and Game Scores, the system can pick out the key plays and players from any baseball game.  Second, the system includes a library of narrative arcs that describe the main dynamics of baseball games (as well as many other competitions): Was it a come-from-behind win?  Back-and-forth the whole way?  Did one team jump out in front at the beginning and then sit on its lead?  The system uses a decision tree to select the appropriate narrative arc.  This then determines the main components of the game story and enables the system to put them together in a cohesive and compelling manner.  The stories can be generated from the point of view of either team.

The New York Times wrote about StatsMonkey in October, saying “If that sounds like a recipe for robotic, lifeless journalism, you’re probably right, but the weird thing about Stats Monkey is how not-that-terrible the stories are.”

(To check out StatsMonkey’s narrative prowess, All Things Considered gives one example, and the New York Times provides another)

An article on Wired.co.uk in December, meanwhile, took on the larger influence of machines in journalism. Writer Peter Kirwan compares modern journalism to pre-industrial stocking-makers. “Famine isn’t a worry for most journalists in the developed world. But the information workers who toil at the core of the news business do resemble the stocking-makers of Nottinghamshire in other ways,” he writes.

Journalists remain artisans in an era of industrialization. Inside newsrooms, the old craft methods remain dominant. Outside, across the vast expanse of the web, algorithms are automating the information industry.

Faster, cheaper, faster, cheaper: this is the same relentless rhythm that accompanied the stocking-makers’ efforts to accelerate their craft to steam-powered velocity. Digital Taylorism? Churnalism? Both are the inevitable result of attempting to make human beings deal with information at machine-like speeds.

Kirwan looks at some mechanization of news production as a good thing, describing NewsScope, a project of Thompson Reuters that started carrying stories late last year written by machines, for machines. Originally a program to facilitate machine reading of financial news, Kirwan writes that service recently branched out to machine-written stories. “The latest iteration of NewsScope “scans and automatically extracts critical pieces of information” from US corporate press releases,” he writes. “Inevitably, machine shall speak unto machine.”

But what about machines writing for humans? StatsMonkey, apparently the first program successful at creating consumer news, has raised a few hairs over the last few months.

Some reporters responded, arguing quality, if not accuracy could be sacrificed in machine-reported journalism. Here’s one example at CBS and another from a Hartford Courant blogger.

But Kirwan doesn’t see this is a bad move for journalism necessarily.  Though this idea of machines pushing reporters out of the business certainly raises ethical flags, mechanization also has the potential to facilitate ethical journalism. Machine-based analysis can reveal “surprising correlations,” he writes. Journalists could work with machines to do reporting more efficiently. They might also reduce the cost of news production and the strain on journalists to produce news so quickly that errors and ethics breaches result.

*  It could instantly write a game story as soon as the last out is made, freeing a reporter to go down to the field or the locker room to do interviews
* It could generate a story about any game in progress, at any point during the game — just what someone might want when checking on a favorite team during the work day.
* It could create stories about games — for instance, college baseball — that are not routinely covered by professional journalists.
* It could generate stories about each player in a game for whatever people are especially interested in particular players (not hard to imagine for college baseball)
* If Little League coaches start to enter game information through a mobile device (and there already is at least one “app for that”), it could generate game stories about Little League games, which have a passionate following but will never be covered by professional journalists.

He argues that machine journalism is only a threat to journalists who already write like machines. Losing them might not be such a bad thing, ethically. “I would have to say to any sportswriter: If your game story CAN be generated by a computer, at some point it WILL be generated by a computer. Human journalists will do — and should do — the kind of reporting and storytelling that computers can’t,” he writes.