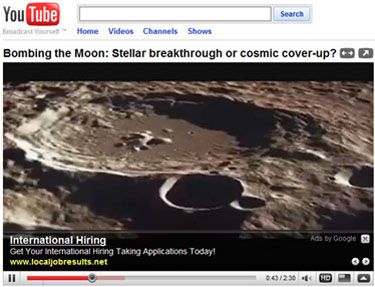 The moon appears in a video still from a Youtube response to the NASA LCROSS mission. Media misleadingly referred to the project as 'bombing' the moon. (Credit: itnnews/Youtube)

On the morning of October 9, the NASA LCROSS mission impacted the Moon to test the debris for water.

Many media outlets covering the story took up sensational headlines along the lines of: “NASA Bombs the Moon.”

The Age: “NASA bombs moon’s surface in search of water”

But is it accurate to say that NASA “bombed” the Moon?

Daniel Cressey writes on Nature.com that “Previous missions have also used ‘impactors’ to kick up Moon dust and help us see what the Moon is made of (hint: not cheese), but today’s LCROSS impact has been characterized by a bombastic tone. This is not an impact, according to the media. Instead, NASA has BOMBED THE MOON.”

The violent tone has fueled conspiracy theories and misinformation about the mission including that it is ‘bombing the Moon’ to destroy evidence of a secret base, and that NASA is conducting “war upon the moon,” Cressey reports.

Even Rush Limbaugh chimed in, suggesting that bombing the Moon might trigger retaliation from peace-loving aliens.

Kenneth Anderson and Glenn Harlan Reynolds, writing in Forbes, say that the idea of “bombing” the Moon has caused people to question if the LCROSS mission was even legal.  “Comments on Web sites such as Scientific American and Nature indicate that quite a few people thought the whole venture to be some sort of outer-space vandalism. Some even wondered whether NASA might have acted illegally or violated an international law or treaty by setting out to ‘bomb’ the Moon.  The answer is no,” they say.

Ian O’Neill, writing on his blog Astroengine.com, argues that in some sense, it is scientifically correct to says that NASA bombed the Moon.  “As much as it pains me, using an inflammatory statement like ‘NASA Bombed The Moon’ is a correct analysis of the effects of the Centaur dead-weight hitting the Moon,” he writes.

“What with all this heat, light and shrapnel, the Centaur impact sure is sounding like an exploding bomb. If you convert the 7.4×109 Joules into units more synonymous with weaponry, we find that the energy released during the Centaur impact was the equivalent of 1.8 tonnes of TNT exploding. That’s the size of a small bunker-busting bomb.”

But, using the term “bomb” is still a sensationalist tactic, he argues. “The press milked ‘the Moon bombing’ way beyond what I’d consider to be reasonable, taking full advantage of the violent connotations associated with this incredible NASA mission to probe for water on the Moon.”