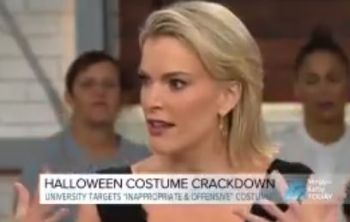 NBC News’ Megyn Kelly asked if it was racist to wear blackface on Halloween, commenting it was OK during her childhood if “you were dressing up as a character.” She also defended  The Real Housewives of New York cast member Luann de Lesseps for dressing like Diana Ross last year and changing her skin color.

According to CNN, “Kelly made the offending remarks during an awkward roundtable discussion about inappropriate and offensive costumes on her eponymous one-hour block of the Today show, known as Megyn Kelly Today.”

Hours later, and after online blowback and controversy, Kelly sent an e-mail to her coworkers apologizing for her comments justifying blackface in Halloween costumes. “I realize now that such behavior is indeed wrong, and I am sorry,” she said in the e-mail, which the Hollywood Reporter obtained. “The history of blackface in our culture is abhorrent; the wounds too deep.”

iMediaEthics has written to NBC to ask if Kelly will issue any on-air apology and if NBC itself has any comment. NBC News itself published a news story on the e-mail apology.

UPDATE: The next day, Oct. 24, Kelly issued an on-air apology, saying “I was wrong and I am sorry.” Regardless, by Oct. 26, her hour of the Today show was canceled.