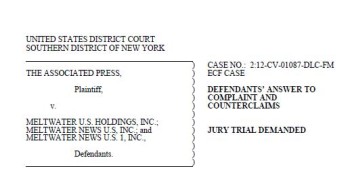 A screenshot from Meltwater's counter claim.

Meltwater issuing the Associated Press for libel over the AP’s February 2012 press release announcing the AP’s copyright infringement lawsuit against Meltwater, according to Media Post.

The AP claimed that Meltwater sends to subscribers “a modern-day electronic clipping service with a guarantee of ‘no copyright fees'” that includes “substantial verbatim excerpts from AP stories and other published news stories.”  Further, the AP argued that while AP was paying to create the content, Meltwater was paying “only the minimal costs of electronic distribution.”  The AP also differentiated the company from news aggregators because Meltwater doesn’t “license the content” from the AP.

“Meltwater News is a parasitic distribution service that competes directly with traditional news sources without paying license fees to cover the costs of creating those stories. It has a significant negative impact on the ability of AP to continue providing the high-quality news reports on which the public relies.”

The April 2012 lawsuit by Meltwater claims that the AP’s statements were “false and misleading” and were “specifically intending to harm Meltwater’s ability to do business with existing and prospective customers,” MediaPost reported.  The company also issued a February 14 press release immediately in response to the AP lawsuit, in which Meltwater said the company didn’t know about “the AP’s concerns” until the lawsuit.

Meltwater claims that it has lost “existing” and “prospective” customers because of the AP’s claims, according to MediaPost.

Meltwater also claims that the AP’s claim “that Meltwater misappropriates ‘hot news'” is an attempt to “dramatically expand the so-called ‘hot news’ doctrine.”

We wrote to both sides asking more about these lawsuits.

The AP’s Director of Media Relations Paul Colford told iMediaEthics by e-mail that “the litigation is unfolding” and directed us to the AP’s February 14 press release announcing its lawsuit.

Edelman’s Travis Murdock, on behalf of Meltwater, told us that the company “doesn’t have any additional information,” but sent us the  District Court claim in response to the AP’s lawsuit and announcing the libel lawsuit.  In that claim, Meltwater argues that its service provides “the same basic information returned by numerous other Internet search services” and that it “operates fully within the bounds of U.S. copyright law.”

Further, Meltwater claims that the AP made “false” claims with “no basis in fact” and is calling for the AP’s lawsuit to be dismissed, for punitive and compensatory damages and for costs and fees.