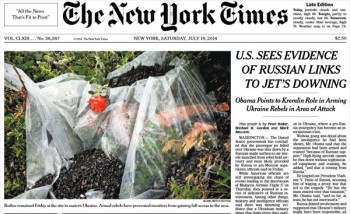 A detail image of the front page of the New York Times. (Credit: NYTimes, screenshot)

The photo, published on Saturday, July 19, 2014 above the fold, shows what appears to be the lower legs and feet of a victim, with a plastic sheet over the body. There are piles of dirt apparently holding the sheet down and a flower is on top. The caption reads: “Bodies remained Friday at the site in eastern Ukraine. Armed rebels have prevented monitors from gaining full access to the area.”

The photo is credited to Reuters’ Maxim Zmeyev.

Calling it “one of the most beautiful pictures of war I’ve seen in a long time,” Times executive editor Dean Baquet explained the photo was necessary to properly report on the crash.

He said that the Times  is “careful” in showing graphic photos but that it was important to “give people all the information the need to make profound decisions.”

See below the front-page.

According to Sullivan, Baquet gave the final OK on the photo but “there was no debate” about whether to run the photo.

“This is not the time for antiseptic coverage,” he added. “We are going through a remarkably violent chapter in the world, and we’re irresponsible if we don’t reflect that.”

For her own part, Sullivan remarked that the photo was “disturbing but not inappropriate.”

“It told the terrible story, and did so artfully and with impact,” she wrote.

The day before, July 18, many newspapers, included the Times. opted for images of the wreckage for their front pages. The Huffington Post collected a handful of them, as did Mashable.