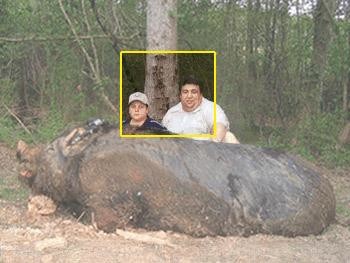 Mike Stone posts these two photos on his “hate page” and boldly states, “They are two TOTALLY different pictures and both have been shown without ANY misrepresentation, especially by CNN.” Really? Photoshop expert, Rob Nelson proves otherwise. Compare the same tree in both photographs. Hidden in plain sight are obvious alterations to the tree. Again, these two photos are taken from Stone’s Monsterpig.com web site. Please stand up, Mr. Stone and explain to the world these Photoshop alterations?

My grandmother always said that when you sleep with pigs…well, you know the rest.

In this case, my “sleeping with pigs” took the form of my research on this Monster Pig fraud. I had hoped to ignore Mike Stone’s MonsterPig.com rant, for many reasons including the fact that I feel sorry for the guy and his son. We at iMediaEthics primarily blame the media for this fiasco. However, Mike Stone must be held accountable for his misrepresentations.

The hoax was bound to fail. Look at the obvious photoshop alterations. Compare the same tree in both photos. Discovered by expert, Rob Nelson, one of these two photographs is from Mike Stone’s own web site “hate page” against the author of this report.

The Society of Professional Journalists (SPJ) ethics code cites that journalists need to be sensitive to inexperienced or young subjects. My first contact with the Stones was an email. Read my email. I explained exactly who I was and even provided a web address that explains what our not-for-profit, education-based group, Art Science Research Laboratory (ASRL) is and does. I tried to frame my questions in such a way that would let them know clearly I knew what was up, and yet, simultaneously inform them I would be open- minded to–and kind upon–a confession. I still feel this way.

Our goal here at the ASRL is to leverage errors in the media for a greater good. That includes investigating dubious or wrong cases of reportage in the media. When warranted, we ask for corrections and advocate for better corrections policies at the media outlets. Most of all, we promote the media’s use of scientific method and fact checking with experts–before publication.

Errors are inevitable. Hey we’re all human, right? However, in the case of Monster Pig reportage, neither AP nor Fox News whose coverage whipped a media tornado around the world ever bothered to fact check with experts before propagating an obvious hoax. How is it that only the bloggersphere clearly articulated doubt about the photo? iMediaEthics  was the first to ask an expert to do an analysis. These small dust-ups are opportunities for the practice of critical thinking, analysis and discussions among media and the public.

I have yet to receive any sort of complaint from Mike Stone, either in writing or by phone. Yet, he has publicly, and libelously, accused me of “stalking him,” as well as misrepresenting myself, on his website. It would not be appropriate to contact him directly. Stone has not been in touch with me (nor I him) since we last spoke as he was on his way to New York City, Monday, May 28th. He gave me his cell phone number (asking me to keep it confidential, and I have). I asked him to call me when and if he has time.

In our conversation, I offered to show him the ASRLab on Greene Street, a place chock-a-block with art and antiques that young people especially seem to love. I suggested he could meet the interns here and learn more about what we do. The invitation is still open. I explained that I started ASRL with the late Harvard scientist, Stephen Jay Gould.

I told him that I bet my fiancee, FDNY Chief Ron Spadafora (who I met at Ground Zero while volunteering there) would be glad to take Jamison to the nearby firehouse to show him big trucks. I had already done a one-hour phone interview. Stone remarked that many people had called to ask him about how far back Jamison was standing. To answer this question, Brandt, the scientist who did the study in my report, asked for a measurement of the boy’s head. Stone’s last words to me were, “when we get together, you can measure Jamison’s head.”

Sadly, Stone’s declaration about the facts regarding our interactions and exchanges on MonsterPig.com is one more example of his miscarriage in use of the word “truth” that, I believe, will come back to haunt him like Jacob Marley’s ghost.

Stone swore they never “posed” or contrived any snapshot

Stone has told me (and I assume many others he said who called the authenticity of the photos into question) that he had no more photos than those that were posted on his website. He “threw them away” and they “lost” a second camera. They never “posed” or contrived any snapshot. They were “too tired from 3 hours” of chasing the pig.

Now, however, he claims in his rant that a second camera did, indeed, capture a different view of people standing with the pig. “Two of us standing beside each other took pictures within seconds of each other with two different cameras,” he wrote. “The gun was taken out of the picture because it seemed a distraction from the photo.”

Think about that for a second. We are meant to believe that within seconds everyone maintained almost exact positions while a third unknown person ran in and removed the gun? You don’t have to be Sherlock Holmes to recognize that the evidence, and his words, reveal that the gun was not removed as the picture was being taken, but after the fact–in Photoshop. Mike Stone’s Freudian slip also shows up on his own site: “The gun was taken out of the picture because it seemed a distraction from the photo.”

That, my friend, says it all.