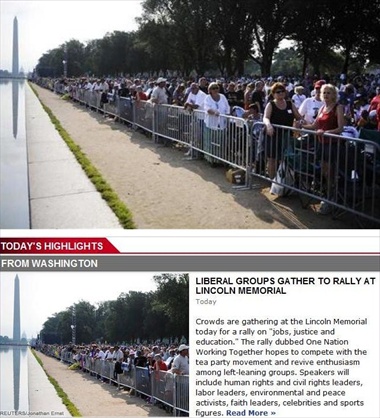 Compare for yourself. The top photo is from Glenn Beck's Aug. 28 rally in Washington, D.C. (Credit: Reuters, Jonathan Ernst). The bottom photo is a screenshot from C-SPAN's coverage of the Oct. 2 "One Nation" rally (Screenshot from Gateway Pundit's blog)

Blogger Jim Hoft accused C-SPAN of using an image from Glenn Beck’s tea party rally with its coverage of “One Nation” rally in his Oct. 2 First Things’ Gateway Pundit blog.  (“First Things is published by The Institute on Religion and Public Life, an interreligious, nonpartisan research and education institute whose purpose is to advance a religiously informed public philosophy for the ordering of society.”)

Hoft wrote in an e-mail to iMediaEthics that he saw the image on C-SPAN’s website, but that he hasn’t had any contact with C-SPAN.  He recognized it from the Beck rally because “The Gadsden flags gave it away and the photographer’s name at the bottom of the picture.”

The Blaze, a blog produced by Glenn Beck and his writers, also criticized C-SPAN for re-using the photo.  The Blaze’s Oct. 2 blog post credited Gateway Pundit for the find, also noting that the picture used to promote the “One Nation” rally “is actually a cropped Reuters photo taken on August 28 during the ‘Restoring Honor’ rally hosted by Glenn Beck, seen here.”

The Glenn Beck rally photo can be seen here.

See C-SPAN’s coverage of the “One Nation” rally here.

iMediaEthics has written to C-SPAN and will update with any response.

Further, the Daily Caller’s Matthew Boyle wrote that the “One Nation” website also was misleading readers. Boyle reported that the website featured an image of Martin Luther King, Jr.’s 1963 March on Washington.  Superimposed on the image is “text thanking attendees and asking them to submit photos and stories from the group’s 10-2-10 rally,” Boyle explained.

Aimee Castenall of the One Nation website is quoted as telling The Daily Caller she doesn’t find the image misleading since she recognizes the photo as from 1963.

But, The Daily Caller further reported that Flo McAfee, a spokesperson for the rally, said that the website will be updated with a photo from the actual rally.

iMediaEthics still saw the photo on the One Nation Working Together website here as of Oct. 4 morning.  But, by 3:30 PM EST, the image was replaced by what appears to be a photo from the Oct. 2 rally.

McAfee also is reported to have told the Daily Caller that roughly 175,000 people attended the rally.