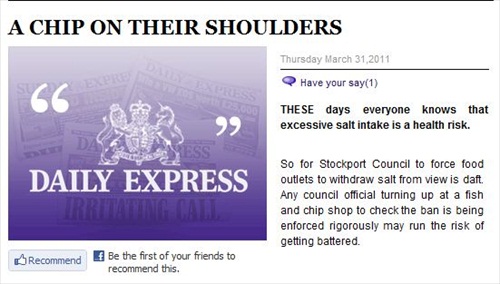 The Express and the Daily Mail have been accused of misleading stories. (Credit: Express)

Two UK newspapers have been accused of running misleading stories suggesting that the UK has banned salt in fish and chip shops.

But as the Guardian’s Roy Greenslade and UK watchdog blog Tabloid Watch pointed out, the facts of the matter show that the alleged salt ban is really just “an initiative by Stockport council” and only “five Stockport shops have signed up for it.”  It’s not mandatory, and all it does is take salt off the counter. If customers ask for salt, they can have it.

“You have to read between the lines because it transpires that it is a voluntary scheme called ‘out of sight, out of mind'”  Greenslade explained.

However, the Express’ brief commentary story (see here) claimed that the Stockport Council mandated the ban on the presence of salt.

In a separate, longer story, The Express described the alleged ban as a “nanny state ruling on what we can eat” and a “petty diktat.”

In the fourth paragraph, the Express does talk about Stockport Council and comments that the council “wants” the salt off the counter, perhaps its indication that the alleged mandate isn’t so mandatory.

Later on in the story, the Express claimed that “the clampdown on fast food is not confined to Stockport,” citing Rochdale’s 2008 National Salt Awareness Week effort in which councilors distributed “salt shakers with fewer holes.”  That movement was also just an initiative, in which a council sent “200 shakers, which have only four holes, to 39 shops.”

Also, the Express cited a proposed 2010 ban in New York City of salt. That effort was a bill brought up by a Brooklyn assemblyman to block the use of salt in food preparation.

The Daily Mail’s March 31 story ,”The town that’s banned salt: Shakers taken off chip-shop counters and put out of sight,” suggested both that the salt shaker hiding was both already an active policy and an approved to be implemented policy, (emphasis ours):

“Now they have gone a step further and removed the shakers altogether to hide them from view.

“Fish-and-chip shops, cafes, restaurants, takeaways and curry houses will take salt containers off their counters and table tops under the latest push by a council  to cut its residents’ salt consumption.”

Later on, the Daily Mail explained the “scheme” isn’t mandatory and that Stockport “is one of the first councils” to agree to the suggestion.

iMediaEthics is writing the Mail and the Express to see if they plan to run clarifications or corrections. We will update with any response.