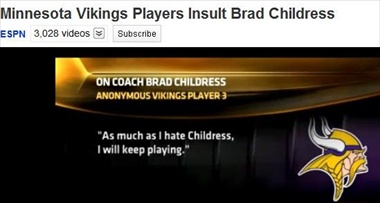 The article was attributed to six anonymous sources, reported to be team members with the Vikings, the Star-Tribune noted.  The article also attributed information to a “team source” and dated interviews.  The sources claimed Childress criticizes players and “has no people skills.”

Anonymous players are quoted as saying, among other things that :

In response, Vikings defensive tackle Pat Williams said he doesn’t know if the claims are legitimate because the complaining players aren’t named. “That’s just all reports,” the Star-Tribune reported Williams said. “Ain’t no names. … So I really don’t pay no attention to that. That’s all he-say, she-say stuff. They ain’t going to put no names out there, so I don’t know if it’s true or not.

“That’s like somebody [spreading a rumor about me], but they don’t have to tell me who said it,” Williams is quoted as saying. “If somebody starts that rumor, [people are] going to believe it. So that’s how it is. That’s all rumor.”

Another Vikings player, defensive end Jared Allen, reportedly told the Star-Tribune that he hasn’t read the story but heard about it. “If you’ve got something to say, say it,” Allen said. “If not, there are some things that should be kept in-house. There’s some things that you guys [the media] don’t need to know about.”

Vikings quarterback Brett Favre also criticized the rumors, noting that he “has no problems with Brad,” ProFootball Talk reported.

iMediaEthics has written to the Chicago Sun-Times asking for comment about the accusations.  We will update with any response.