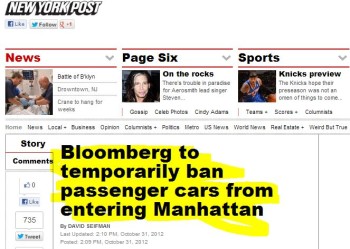 See above a screenshot of the story in question, available through Google Cache. (Credit: NYPost/Google Cache, screenshot, highlight added)

The story was sourced to unnamed “City Hall sources” and the story’s link now leads to a “Page Not Found!” notice.  Google Cache still produces the story in question.

In a follow-up tweet, La Vorgna wrote that, “There will be cars in Manhattan tomorrow. Period. Mayor will provide details about transportation shortly.”

Those details, according to blogs Jalopnik and Gothamist, were that Bloomberg said, “I’m ordering that the four East River bridges be restricted to vehicles with three or more people for Thursday and Friday, 6 a.m. to midnight.”

iMediaEthics has written to the New York Post, which is owned by Rupert Murdoch’s News Corporation, asking why it unpublished the story, how long the story was posted, if the Post will post a correction, and if it fact checked the story with Bloomberg’s office before publishing. We’ll update with any response.

Meanwhile, the New York Times issued a lengthy, detailed correction to its live blog on Sandy information.  The blog post criticized the New Jersey governor Chris Christie’s “new policy regarding gas rationing.”  But, according to the correction:

“Correction: A previous version of this post contained a misinterpretation of the New Jersey rationing policy. The Bayonne police were using a summary of the policy that said the days motorists could get gas was based on the last letter of their license plate. Actually, the days are determined by the last number on the license plate, not the last letter. A previous correction also referred erroneously to the summary. The police were quoting that, not state policy.”

The Times blog commented that “the problem” with the policy’s “interpretation” is that “all license plays in New Jersey end in letters, except for vanity plates.”