MSNBC Cuts & Pastes Biden's words about Benghazi, and makes them about Gun 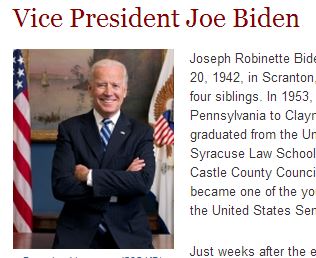 A “producer error” led MSNBC to quote Vice President Joe Biden out of context from one event (about the attack on the U.S. consulate in Libya) and apply it to another segment with a completely different meaning, the Huffington Post reported.

Biden had said, according to the National Review:

“No child should predecease their parents and no one should have to suffer the loss of their spouse, it’s not easy.”

MSNBC’s Thomas Roberts stated in the original segment (which MSNBC evenutally apologized for) that the comments were about “children as the victims of gun violence.”

But Biden wasn’t speaking about gun control.  The clip of Biden was really from a “plaque dedication for Americans lost in the attack on the U.S. consulate in Benghazi,” the Huffington Post explained.

MSNBC apologized the same day, May 3, saying it “regrets the error.”