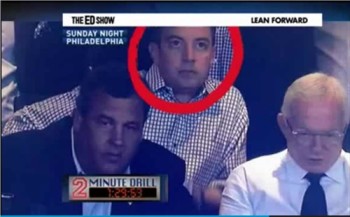 His evidence was a photo of Priebus with Chris Christie and Jerry Jones at a Cowboys-Eagles game. But the photograph was taken at a game in 2013.

“Last night on this program, we showed a picture of Chris Christie, Cowboys owner Jerry Jones and Reince Priebus,” he said. “We thought it was from Sunday night’s game in Philadelphia but it was actually from last year.”

Schultz’s correction noted that MSNBC contacted the RNC whether Priebus was at the game and was told he wasn’t. Regardless, MSNBC aired the photo and claims. “We should not have used the photo, but unfortunately we did. That was our mistake.”

iMediaEthics is reaching out to the RNC for comment.