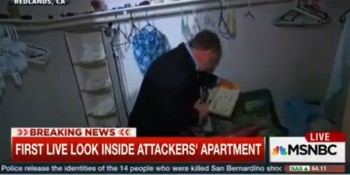 MSNBC's reporter going through belongings in the townhouse of the suspected San Bernardino shooters.

Farook is the mother of Syed Farook, one of the accused shooters in the San Bernardino shooting this week.

iMediaEthics watched the video of MSNBC going through Syed Farook’s townhouse after his landlord let media in. The MSNBC reporter went through the rooms, looking through a calendar, a stack of photos of unidentified people, and so on, with the camera showing close-ups of some. At one point MSNBC’s Andrea Mitchell in the studio cautions to not show pictures of the children.

Ironically, on MSNBC later, the commentator said law enforcement wanted to be “slow and correct rather than fast and wrong.”

Over at CNN, Wolf Blitzer discussed the media going through the townhouse.

“Never have I seen something like this,” CNN legal analyst Paul Callan said on air about the media being allowed such access to the townhouse, going through belongings, especially when it doesn’t appear fingerprinting was done yet.

“Turned a crime scene in a terrorist mass murder into a garage sale,” he added.

For its part, CNN told Mashable:

“CNN, like many other news organizations, was granted access to the home by the landlord. We made a conscious editorial decision not to show close-up footage of any material that could be considered sensitive or identifiable, such as photos or ID cards.”

As @mitchellreports said on @MSNBC: the apt owner permitted the press tour, the FBI has already cleared out useful evidence

Mashable added: “News outlets, including MSNBC, BBC, CBS News and CNN, broadcast live scenes as reporters toting cameras and microphones pushed through the open door and reported from inside the apartment.”

Below, see some tweets about the media coverage inside the townhouse.

MSNBC got in first and was most reckless, with so many close-up shots of family photos (including children) and IDs. pic.twitter.com/OCQaf84LL0

You're journalists. You're supposed to care about integrity, not spectacle. Go to Hollywood where you belong and get out of my profession.

That was some of the nuttiest live TV I've seen in a while. Imagine journalism schools will examine this for years.

brb, giving up america and journalism to be a goat farmer in new zealand

Classy: NBC inside the house of San Bernardino attackers https://t.co/6p368wU3o4

iMediaEthics has written to MSNBC to ask if it will apologize, blur or remove the driver’s license, in particular, from its coverage.