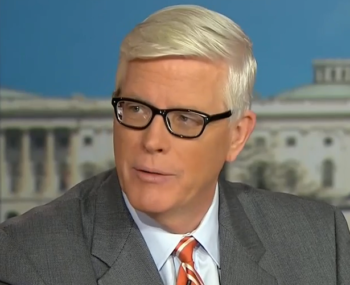 Hugh Hewitt, an MSNBC host and Washington Post columnist, has ties to the Environmental Protection Agency. His son works for at the EPA, and he himself is friends with the controversial head of the agency, Scott Pruitt.

MSNBC gave Hewitt a “verbal warning” after Hewitt set up a meeting for the EPA, NPR’s David Folkenflik reported on Twitter.

An MSNBC spokesperson told  CNN that Hugh Hewitt disclosed several times to viewers that he has a friendship with EPA Administrator Scott Pruitt and also that Hewitt’s son works for the agency. As a result of those relationships, Hewitt stopped discussing EPA-related matters on MSNBC. However, after the network learned Tuesday that Hewitt set up an EPA meeting in the fall, he was given a verbal warning as “such activity is a violation of our standards.”

The Washington Post told Hewitt he can’t write about Pruitt, the Associated Press reported. The Washington Post provided iMediaEthics with the following statement from editorial page editor Fred Hiatt:  “I was disturbed to learn [Tuesday] morning that Hugh Hewitt had intervened with EPA administrator Scott Pruitt on behalf of Hewitt’s law firm as he was writing about Pruitt in a column for The Washington Post.  Hewitt, who has not written about Pruitt since September, has agreed not to write about him going forward and has assured us that similar incidents won’t occur in the future.”

Poliico reported, based on FOIA records, that Hewitt “brokered a meeting between [EPA administrator Scott Pruitt] and lawyers for the water district that was seeking federal help to clean up the polluted Orange County site.”

On Twitter, Hewitt wrote that his involvement in the meeting was a “non story” and that he e-mailed Pruitt “asking him to meet with a client of firm re an Obama era clean up agreement which we supported for Orange County Water District.”

“replied to @Politico last night as soon as they asked. This is a necessary clean up 4 Orange County, approved u under Obama EPA Region 9. I also told @Politico the last time I was in the office of a senior EPA official pleading a client’s case was w/old friend Felicia Marcus,” he tweeted. “Who was Bill Clinton’s Region 9 Administrator. Reporter did not include that in story. But yes, I asked for meeting. Proud to have done so though it isn’t my client. It was my home and I have served as County appointee for 17 years. Nasty place needs clean up ASAP.”

Hewitt added, “Finally, I have disclosed my friendship with Scott Pruitt about 300 times on air, whenever I have discussed @EPA issues on air or in print. Every. Single. Time.”

Who was Bill Clinton’s Region 9 Administrator. Reporter did not include that in story. But yes, I asked for meeting. Proud to have done so though it isn’t my client. It was my home and I have served as County appointee for 17 years. Nasty place needs clean up ASAP.