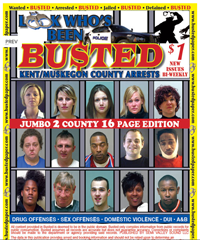 Mugshot magazines and newspaper sections, featured in an iMediaEthics report almost two years ago, are still a growth industry. The core problem is: you may be innocent until proven guilty in a court of law…but no one looks innocent in a mug shot.

In February, the publication Busted made inroads into Minnesota when it published the first issue of “Anoka, Dakota, Ramsey and Hennepin county jail photos,” the Pioneer Press writes.

Since these publications only make “already-public information” more accessible, those who see published mugshots as ethically problematic should also question local police departments.

Not all police departments release mugshots. The New York Police Department releases photos and arrest records only if they are actively searching for a person, says Sgt. Rodriguez at the NYPD press department.

Busted, meanwhile, amasses photographs from places where mugshots are considered to be in the public domain.

At the same time, just because some information is available doesn’t mean it’s a good idea to publish it widely, though some argue magazines like Busted serve a useful purpose.

Busted publishes eight other editions across the country, Nancy Ngo writes at the Press. Other similar publications, like Cellmates, Mugshot magazine, Local MugSHOTS, and “Gotch-Ya!” fill out even more markets. As StinkyJournalism wrote in 2008, “there is a whole publishing industry surrounding regular folks’ arrests served as just cheap, plain-vanilla mug shots with a little information–such as the person’s name and charge on the side.”

The Press quotes Ryan Chief, owner of Busted, who says he thinks the magazine offers a public service.

“This is public information. … It informs communities of recent arrests,” he said. “By doing so, we’re educating them on what’s going on in their community.”

Chief cited one instance in which Busted helped identify a sex offender at a YMCA in a Michigan community. It prompted background checks that later identified 22 registered sex offenders who were not supposed to have been allowed membership, he said.

While the sex offender images may have aided justice in some cases, the rest of the photos are of questionable ‘public service.’

As CNN argued in 2008, failing to include important details about these arrests–first whether they were for a serious offense or not, and then where, when and how the alleged crimes occurred–these images could be just as likely to mislead a reader as they are to inform.

For example, CNN cites “Public Lewdness,” a charge that could mean a range of things from “urinating on a telephone pole,” to exposing oneself to children. A photo captioned simply “public lewdness” might wrongly influence a reader to think the person pictured is a pervert when they were merely drunk and relieving themselves on some train tracks when a cop happened by. That’s not a public service; that is potential misinformation.

iMediaEthics interviewed Chief over the phone. He contends that he’s never had a complaint about such an instance, and that responses to Busted often go the other way. Sometimes people are grateful to Busted for featuring their mugshot.

“We heard from a girl arrested for shoplifting,” he says. “It turns out she was shoplifting to get money for drugs, and because she was in the paper, her parents found out and now she’s in rehab. She had to face the music. Whereas she could have just gone to court and then gone back to drugs without anyone finding out.”

Unfortunately, seeing a mugshot may make readers assume the person pictured is guilty whether they are or not. Indeed, not everyone who is arrested and has had a mugshot taken actually committed a crime.

Sometimes people are innocent. But while appearing in Busted, the false impression is given that people are already convicted.

Thus, it may be on the shoulders of law enforcement to be responsible for preventing harm to the innocent through these publications.

As we wrote, the NYPD in New York City does not release mugshots and arrest records. And while it may be legal that these records be freely available to the public in other jurisdictions, it’s less clear how selling them for $1 greatly enhances the public good.

Chief defends Busted by saying the paper is simply making already public information easier for the public to access. As he says, mugshots are a matter of public record and, therefore, legal to publish. In fact, all the images published in Busted and elsewhere are available (often for free) on precinct websites or in person at the police station, so why are people interested in paying for them at all?

Chief argues that Busted clearly states that people in the mugshots haven’t been convicted. But as the Pioneer Press points out, this disclaimer might not be enough to prevent harm. “Critics fear publishing and widely distributing mug shots could give the impression people are guilty when they haven’t necessarily been convicted of a crime,” they write.

When asked what Busted is most akin to, Chief doesn’t say journalism.

“It’s America’s Most Wanted and COPS and probably a little Jerry Springer in there too,” he says. Questioned about the term “public service,” Chief admits do-goodery isn’t the end-all be-all of Busted. “I’m not claiming I’m Clark Kent or Bruce Wayne.  There’s obviously a sensationalized factor as well… for the same reason people watch COPS…or for that matter read the LA Times or the Chicago Tribune for an article about someone arrested for a DUI or a sexual assault,” he says.

“It’s a no brainer.  People like this stuff, they like picking this up.  They like knowing what people are up to,” Chief says adding that the largest readership market for Busted is middle-aged women.

For ethical journalists, the fact that readers want and are willing to pay for something doesn’t mean it should necessarily be published. For Busted, that ethical rule does not to apply to mug shots.