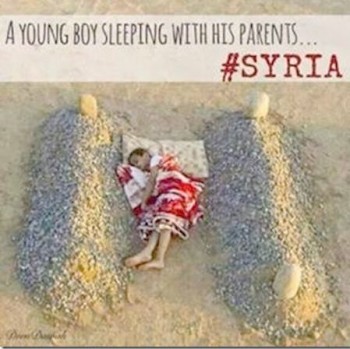 This photo was published on the Muslim Observer's website April 3. It is labeled as a photo of a Syrian boy sleeping between his parents' grave when it is actually a photo of a boy in Saudi Arabia posing for his uncle. (Credit: Muslim Observer, screenshot)

The photo was published on the Observer‘s website and on the front page of its print edition.

We received a photo of the front page via Twitter:

iMediaEthics previously debunked the photo as fake in January of this year.

The photographer, Abdul Aziz al Otaibi based in Saudi Arabia, confirmed to iMediaEthics at the time that the photo was part of an art project. The boy shown is his nephew, and al Otaibi said he created the fake graves using stones. The photo was taken near Jeddah, Saudi Arabia.

See below a photo of the boy posing, from al Otaibi’s Instagram.

The photo was published on the Muslim Observer’s website along with a Reuters story titled “Death Toll in Syria’s Civil War Above 150,000: Monitor.”

See above a screenshot of the Muslim Observer website

The Observer says on its website it is a news organization created in 1999 focusing on “matters pertaining to Islam and Muslims.”

iMediaEthics has written to and left a voicemail for the Observer asking where it got the photo, to confirm the photo was published on the front page of its print edition, to ask how it sought to verify the photo and to see if it will publish a correction or clarification since the photo is not of a boy in Syria . We’ll update with any additional information.

UPDATE: 4/14/2014 6:29 PM EST iMediaEthics has heard back from the Observer. Adil James, Managing Editor for the Muslim Observer, said ‘thank you” to us for contacting them about the error.

“Someone in the office” was “intrigued” with the photo and they ran it “outside their normal channels of using Reuters” which they “pay a lot of money for,” James said by phone to iMediaEthics’ Rhonda Roland Shearer.

He said he was “going to correct the web site right now” We verified that he did. A note on the paper’s website reads:

“Note: TMO previously ran a photo purporting to show a ‘Syrian boy sleeping with his parents,’ which showed a boy sleeping between two graves.  In fact the photo was made outside of Syria, posed by an artist.  TMO apologizes for having printed this photo without first verifying its origin.”

James added to iMediaEthics that, “We are going to print a correction in the next print edition” which will be available to readers on Friday.