My so-called frog: Was BBC duped by frog-child story?

MY SO-CALLED FROG: Was BBC duped by frog-child story? 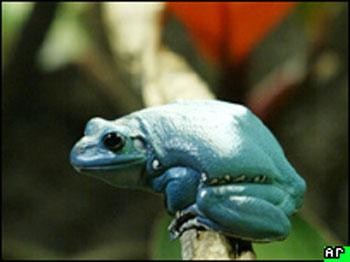 While at times referring to its subject as a “so-called frog,” BBC News reported an Iranian woman gave birth to a frog. Citing “The Iranian daily Etemaad,” BBC News says, “the paper carries quotes from medical experts who say there are human characteristics to the animal.”

The BBC carries a lovely photo of a frog, but it reeks of stock footage.

If this is indeed a photo of the frog-child beast on that tropical-looking branch, all media outlets involved missed a grand chance to get the mother’s quote about how much she’s saving on nursery furniture. If the photo is, however, stock, then it serves no purpose whatsoever, as most people who read BBC News Online probably know what a frog looks like. In this case, instead of serving an informative purpose (as a stock photo would if, for instance, a woman had supposedly given birth to a zebu) it only serves to decorate or to deceive.

Citing “Farsi-language daily E’temad” Payvand.com covers the “story” too, saying “Following severe bleeding, the woman who has not been named gave birth to a live gray frog accompanied with mud.”

Halfway around the world, there are medical experts pondering a frog with fingers. No wonder you have to wait so long to see a doctor — they’re all in the back prodding amphibians.

And I swear I’ve either ordered “live gray frog accompanied with mud” at the Chinese restaurant in Newkirk Plaza or seen the interpretive troupe I-Dance perform it as a routine.

The frog birth report was confirmed, says Payvand.com, by someone they identify as “Gynecologist Varasteh.” (I wonder if Gynecologist is a family name. Someone’s great uncle, perhaps?)

And the Washington Times, republishing a UPI story, provides the following as background and precedent: “In the 17th Century, Catharina Geisslerin, known as ‘the toad-vomiting woman’ of Germany, claimed to have incubated amphibians inside of her body. However, when she died in 1662, doctors found no evidence animals had ever lived inside her body.”

BBC News reports, “it is unclear how this could have happened.”

And while they have no idea how this could be true, all news outlets involved are still going to report it as news.

UPDATE: For more on this story, read our follow-up report here.

MY SO-CALLED FROG: Was BBC duped by frog-child story?