Even a frog will kick the BBC: Iranian woman didn't have frog baby

Even a Frog will Kick the BBC: Iranian Woman didn’t have a frog baby 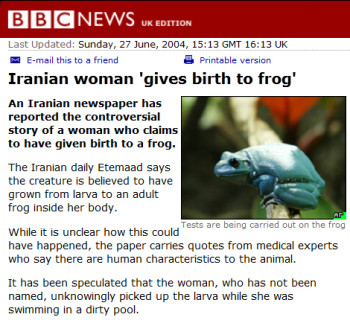 The BBC's original story on the frog baby.

On June 27, 2004, the BBC reported on an Iranian woman who gave birth to a frog. Its frog baby story originated from the Farsi paper Etemaad:

The BBC published the following photo of a frog with the caption “Tests are being carried out on the frog..”

This photo originally accompanied the BBC’s “frog child” story: it has since been replaced with a map of Iran due to our complaint.

David Dickey of the American Museum of Natural History identified the frog in the BBC photo as a Chinese Gliding Frog, Polypedates dennysi, found only in southern China. He noted that students remembered seeing this species at the museum’s current frog exhibition. Dickey called the frog child story “the worst, most ridiculous example” of bad journalism he had ever seen.

Dr. Adler told us that the frog child story is “biologically impossible.”

“Humans produce human offspring and frogs produce frog offspring,” he said.  “This is one of the laws of genetics, based as we now know on the fact that different species have different (although often many of the same) genes. Thus, if some of this Iranian woman’s genes passed to her embryo were defective, she would produce a defective human baby (and probably stillborn because of the defects) and not a frog.”

Adler suggested two possible explanations: “A woman gave ‘birth’ to a grossly misshapen baby that looked like a frog,” or the story was “a fraudulent incident intended to raise interest for some reason.”

Dr. John Friel, Curator of Fishes, Amphibians & Reptiles for the Cornell University Museum of Vertebrates called the BBC story “highly suspect,” and also identified the BBC’s photo as a likely stock image. “More than likely this woman delivered a malformed human fetus like superficially resembled a frog [in] some way.”

Dickey and Harry W. Greene, Professor and Curator of Cornell University’s Department of Ecology and Evolutionary Biology both said this frog tale reminded them of another BBC story published December 29, 2003. The BBC reported that Indonesian villagers claimed to have captured “a python which is almost 15 metres (49 feet) long.” They attributed the story to “newspapers” and “a local official,” saying, “If confirmed, it would be the longest snake ever held in captivity.”

This photo accompanied the BBC’s story about the world’s longest snake.

The same day, CNN reported the story with their own acknowledgement that, like the BBC, they had not verified the snake’s measurement, saying, “it was difficult to confirm the claim as there were no measuring tapes or objects beside the snake to compare its size.”

On December 30, 2003, the BBC published a second story in the form of a video essay on the snake. This story treated the unverified claims of the previous story as fact and used the Indonesian newspapers “facts” without sourcing them.

This BBC photo accompanied four others as part of a photo essay on “the world’s longest snake”.

BBC’s caption reads, “A stretch on a bench gives a glimpse of the beast’s full, record-breaking 15-metre (49-foot) length.”

By January 7, Reuters had debunked the “record-breaking” snake early and revealed the snake’s true dimensions:

“Amid growing skepticism of the claim, a photographer working for Reuters returned to the Curugsewu park in the small central Java town of Kendal on Wednesday with a measuring tape. The snake’s true length — around 21 feet.”

“If the snake were really 43 feet those Indonesians would have dwarfed folks we ordinarily consider giants!” Professor Greene said. “The snake turned out to be a respectably large but by no means huge female Reticulated Python.”

Compare this photo, which accompanied the BBC article about the museum exhibit…

with this photo, which accompanied the BBC article about the “frog child.”

We notified the BBC that the Chinese Gliding Frog illustrating their story was not found outside southern China. We further informed them that their “frog child” photo had been published months earlier in an article about the very museum exhibition in which Dickey’s students had reported seeing an example of the Chinese Gliding Frog.

Within hours, the BBC editor informed us that the graphic accompanying the story had been changed and that they were reviewing further corrections.

This map now accompanies the BBC story on the “frog child.”

“How did this EVER get taken seriously, in the absence of any credible evidence?” Professor Greene asks.

Urban Legend tracker site Snopes.com places the “frog child” story in the same category as folk superstitions where, for example, a “young girl who mysteriously becomes pregnant is discovered to have swallowed octopus eggs.” Snopes says:

“This motif remains popular in films such as Alien, which features a crew member ‘impregnated’ by an alien creature; once the incubation period is complete, the alien lifeform is ‘born’ by bursting out through his chest. As [Harold] Schechter notes [in The Bosom Serpent: Folklore and Popular Art] ‘like the traditional, oral versions that have been popular for hundreds of years, [the] only purpose [of the birth scene in Alien] is to produce emotional response: shock, revulsion, morbid fascination.'”

Greene says the story, under any circumstances, would be “extremely unlikely. To me it sounded right off the pages of a supermarket tabloid.”

African news portal Ghanaweb agreed; in their re-reporting of the BBC story, they classified it as “Gossip News” under the banner of “The Tabloids: A look at the lighter side of the news & life.”

A BBC editor who spoke with us about the “frog child” story said, “I’ve gotten used to [the lack of fact-checking] along the way … I have to distance myself. It embarrasses me.”

FoxNews.com, in a June 29 article called “Distorted Times?” cites the “slippery” frog child story as evidence of their claim that BBC is currently “struggling with complaints about the fairness and accuracy of its work.”

There is a Hindu proverb that says, “When an elephant is in trouble even a frog will kick him.”

The “frog child” might have just turned BBC into Dumbo.

Even a Frog will Kick the BBC: Iranian Woman didn’t have a frog baby