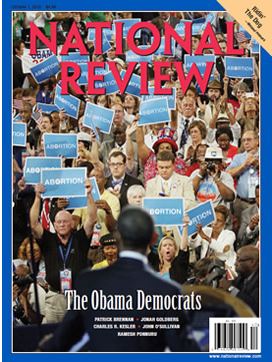 National Review posted a note Sept. 19 to disclose that its Oct. 1 print issue’s cover was an “altered” photo and “should not have been attributed to” Reuters and Newseum, Jim Romenesko reported.

The National Review cover shows an image taken from behind Barack Obama speaking to a group of people holding blue signs saying “ABORTION.”

A Charlotte Observer photographer, Todd Sumlin, provided Romenesko with a similar photo of the same event pictured in National Review without alterations to show what had been changed.  Sumlin pointed out that his photo indicates National Review “changed” the wording of posters being held “from ‘Forward’ to ‘Abortion.'”