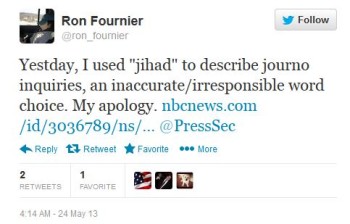 National Journal’s Ron Fournier called his saying President Barack Obama had started a “jihad against the press” an “inaccurate/irresponsible word choice,” in a May 24 apology tweet.

“The irony here is that President Obama by raising a jihad against the press has now made it more likely that that we are now likely to have what he called dumb wars.”

“No one at the table flinched. No one even responded to what he said, nor was there a single news article condemning his remarks.”

While speculating about a needless apology, Media Bistro doesn’t apparently consider that behind the scenes pressures could have been placed.  National Review advertisers or the White House itself could have rung or emailed to complain and ask for a retraction and apology. Just saying.

iMediaEthics is writing to Fournier asking what prompted his apology. We’ll update with any response.