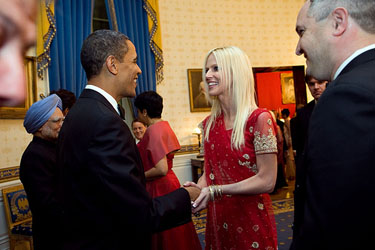 President Barack Obama greets Michaele and Tareq Salahi during a receiving line in the Blue Room of the White House before the State Dinner with Prime Minister Manmohan Singh of India, Nov. 24, 2009. (Official White House Photo by Samantha Appleton)

The recent controversy over White House crashers Tareq and Michaele Salahi has raised many ethical questions about the actions of the couple as well as of the TV network, Bravo, which may feature them on an upcoming season of the “Real Housewives”.

And now, accusations of bad behavior have extended to NBC, which failed to disclose its relationship with Bravo when covering the couple in a first exclusive interview after the dinner party stunt.

The New York Times reports that “NBC and Bravo are both units of NBC Universal, and are both based at Rockefeller Center.”

“NBC News says the appearance of the party-crashers, Tareq and Michaele Salahi, was merely the result of hard journalism and old-fashioned hustle,” Times reporter Brian Stelter writes. “But NBC’s “Today Show” faced sharp criticism on Tuesday and Wednesday when it did not disclose that the couple was being filmed for “The Real Housewives of D.C.,” the latest extension of Bravo’s glamorous and lucrative franchise.”

According to the Times, there is no evidence that the two networks assisted each other in featuring the Salahis, and NBC spokeswoman Lauren Kapp told the paper “I would be perfectly comfortable admitting that this interview was a result of corporate synergy if that were the truth… But in this case I can honestly say that it was good old-fashioned booking.”

However, the issue at hand hinges less on whether NBC actually did anything untoward in securing an interview with the couple, and more on the fact that by failing to disclose their close relationship with Bravo, they reduced their credibility, and opened their coverage up to ethical criticism.

Bob Steele, an ethics expert and professor at DePauw University explains in the New York Times article that the relationship creates a situation of competing loyalties, and should be disclosed.  As Steele has explained in conversation with imediaethics in the past, failing to disclose a competing loyalty or a conflict of interest erodes the credibility of journalists.

According to the Times, “Both NBC and the couple say they received no money for appearing on the ‘Today Show.’ An NBC staff member suggested Wednesday that the couple selected Mr. Lauer in a good-will gesture to NBC and, by extension, Bravo.” Though this does sound like a recipe for conflict, it doesn’t necessarily mean NBC did anything wrong by their audience in featuring the Salahis.  They network did, however, give themselves the appearance of wrongdoing simply by failing to be clear about their connection to Bravo.

The New York Times reports that NBC’s Matt Lauer has been criticized for failing to question the couple about the “Real Housewives” production. No information came out  in the interview about whether Bravo itself had a hand in planning the crash, or whether the Salahis’ stunt has affected plans for their appearance on the series.

Because of Lauer’s choices in conducting the Real Housewives interview, which could be viewed as soft, the issue of NBC’s relationship to Bravo becomes even more important to disclose transparently.