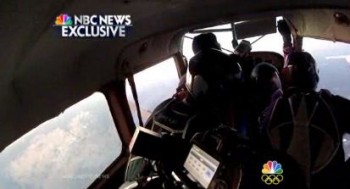 NBC News “licensed” a video for news reports — meaning it coughed up cash for rights to a video, and apparently along with it, the promise of exclusive interviews.

The video shows sky divers who had to jump out of two planes after their planes crashed over Wisconsin.

While NBC News has disclosed that it “licensed” the video, it hasn’t publicly revealed how much it paid for the footage. However, the Washington Post’s Paul Farhi reported that his anonymous network-affiliated sources claimed the skydivers and pilots got at least $100,000 for the video.

Farhi’s anonymous sources said that the people involved in the two-plane crash in Wisconsin got “in excess of $100,000 for their participation.” One of the 11 people on the planes, Mike Robinson, said on the record that “NBC has the exclusive right” to TV interviews with the group for two weeks. The group “can do print and radio interviews,” however.

Licensing can be a way news outlets can dodge ethical guidelines against paying for interviews, or checkbook journalism. In such a scheme, the news outlets don’t directly pay for an exclusive interview or access, but pay fees for video, photos, documents or some intellectual property item.

In this case, the Washington Post‘s Farhi reported that NBC News obtained multiple exclusive interviews with the entire group of skydivers scheduled for Today, NBC Nightly News with Brian Williams and Dateline NBC.

NBC Nightly News aird a clip of the video Nov. 4. During that report, Ann Thompson disclosed paying the fees. iMediaEthics noted that Thompson introduced the video as “this video licensed by NBC News.” See below:

On NBC’s Today show the next morning, NBC again disclosed that it licensed the video. Matt Lauer stated the video was “licensed exclusively by NBC News.”

Farhi noted that the Today show disclosure did not include “the specific financial arrangements behind the skydivers’ appearance” such as who received the money and the amounts.

NBC News’ Ali Zelenko, defending the licensing, told the Washington Post, “Our licensing of this footage is standard industry practice and is the result of a very competitive process with other major broadcast outlets.”

ABC News tried and failed to buy the rights

ABC News spokesperson Jeffrey Schneider revealed that ABC News also tried to buy the rights to air the video, but wouldn’t license the video in order to get the interviews because that would be against “our standards and ethics.”

iMediaEthics has written to NBC asking for confirmation of Farhi’s reporting that the sky divers were paid at least $100,000 for the licensing of the video. We’ll update with any response.

This month, the Toronto Star paid a $5,000 fee to post a video of an intoxicated Toronto Mayor Rob Ford claimined that he wanted to murder someone. No exclusive interview was involved.

See all of iMediaEthics’ reports on checkbook journalism.