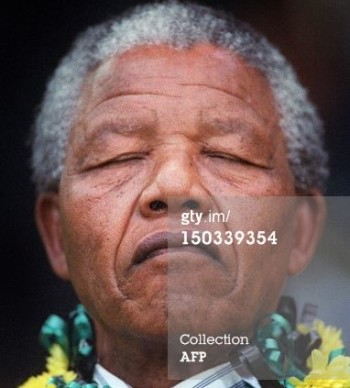 The above 1991 AFP photo of Nelson Mandela closing his eyes has been altered and circulated as a corpse photo. (Credit: AFP, screenshot)

Can’t the man rest in peace? A fake photo purporting to show Nelson Mandela’s corpse is circulating. Hoaxers took a photo of Mandela closing his eyes and Photoshopped it to appear as if a real image of the historic and much beloved South African leader himself who died earlier this month.

Agence France Presse called out the hoax on Twitter, explaining that the photo in question is an AFP photo from 1991. Mandela was far from dead when the photo was taken, and he was just “closing his eyes.”

Photo of ‘dead’ Mandela is actually #AFP image of him closing his eyes at ANC conference in Durban in July 1991 pic.twitter.com/etiYd8fKEh

See the original AFP photo on Getty Images’ website before fakers did their senseless doctoring.

“Portrait of anti-apartheid leader and African National Congress (ANC) member Nelson Mandela, 02 July 1991, in Durban, during the ANC’s first national congress to be held in the country in the last 30 years. Nelson Mandela, who spent 27 years in jail, was freed on 11 februeary 1990. (Photo credit should read TREVOR SAMSON/AFP/Getty Images)”

Anna Cox, one of the two authors of that IOL News article, told IMediaEthics that IOL News published a follow-up story today acknowledging that it was a hoax photo.

Last week, iMediaEthics found 3 news sites that were senselessly hoaxed because they did no fact checking of a satire story saying Kanye West called himself the “next Nelson Mandela.”

Mandela was subject to several hoaxes before his death, as iMediaEthics has reported.

In the summer, when he was hospitalized, Mandela’s friend and current South African president Jacob Zuma’s spokesperson, Mac Maharaj, criticized the media for its wrong reporting that Mandela had suffered a cardiac arrest.

In June, Germany’s Deutsche-Welle prematurely published an obituary for Mandela.

In 2011, The Times of South Africa wrongly tweeted that Mandela was in the hospital.