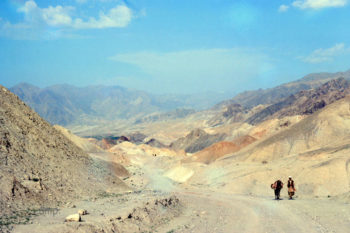 Afghan journalists have a new journalism ethics code for the war-torn country, iMediaEthics has learned. “Freedom of the media is one of Afghanistan’s biggest achievements in the past 15 years, however little attention is paid to quality and standards in this area,” Afghan news site Tolo News reported.

Ahmad Quraishi, executive director of the Afghanistan Journalists Association, told iMediaEthics by e-mail, “The Afghanistan Journalists Center (AFJC) was involved in preparing the draft ethics code and organizing the national gathering regarding the approval of the draft.” The code is in Persian/Dari, Quraishi said, and published here. When a translation in English is available, iMediaEthics will update with that link.

Quraishi pointed iMediaEthics to its report on the code, which explained, “The code reflects the viewpoints of over 400 journalists from across Afghanistan and is designed in six chapters such as accountability, impartiality, balanced, reduction of risk, authenticity and professional behavior at work.”

Afghanistan Journalists’ Federation member Safiullah Zeer said that it took three years to create the ethics code. “Impartiality, balance, accuracy, soundness, national interests and respect to the country’s laws are considered as journalism ethics, the same followed in other countries, he said,” according to Pajhwok Afghan News.

Tolo News, a Kabul-based news organization, reported the code advocates disclosing sources, getting comment from subjects, not accepting payment or bribes, and that journalists shouldn’t self-censor or interview minor-aged sources.

“Based on the code, journalists should not bow down to direct and indirect pressure from government officials, individuals and groups and should also practice caution for their own safety,” Tolo News went on.

The country’s president Ashraf Ghani said in a statement

“The struggle of journalist leaders and organizations for preparing the ethics and standards of journalism will not only help them commit themselves to journalistic manners but also protect journalists from possible vulnerability.”

Tolo News posted a video from the meeting

In 2016, Reporters without Borders lists Afghanistan as 120 out of 180 countries for press freedom. Last year, Afghanistan was ranked 122.

According to the Committee to Protect Journalists, there have been “12 journalists murdered in Afghanistan since 1992.” In total, 29 journalists have died because of murder, during dangerous assignments, or in combat.