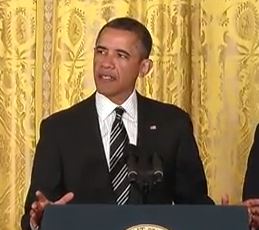 National Public Radio updated its stylebook guidelines for the President of the United States Jan. 17 after complaints of bias, NPR’s ombudsman Edward Schumacher-Matos reported.  At the heart of the issue was whether NPR should call Barack Obama on second reference Mr. Obama, President Obama, or just Obama.

Previously, on “second references,” NPR would identify the president as “Mr.” but because of that practice, some listeners and readers complained how Obama and Mitt Romney were labeled on second reference.  On the other hand, Schumacher-Matos reported “a small number of listeners” called for NPR to be less “informal” with second references for the President.

As NPR managing editor for standards Stuart Seidel explained in a memo to staff republished by Schumacher-Matos:

“During the most recent presidential contest, the contrast between our references to “Mister Obama” and just plain “Romney” were perceived by many as showing favoritism toward the incumbent president.”

Effective with Obama’s inauguration, “Obama and his successors will be called by just their last names on second reference,” but, the president’s wife will “continue to carry an honorific in second references,” so Michelle Obama will be “Mrs. Obama.” NPR allows for exceptions, though, as Schumacher-Matos noted reporters will, even under this new practice, “have the freedom to use an honorific when it helps in the cadence or clarity of delivery” — regardless of who the person in question is.

Schumacher-Matos added that “when a woman is elected president, as surely one will be some day,” NPR will look at the issue again.  For his own part, Seidel acknowledged at the bottom of his memo that it is “an egregiously gender biased note,” adding: