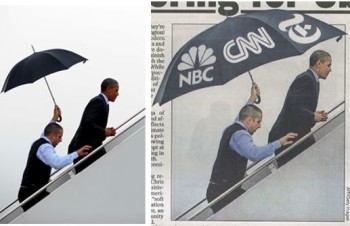 See above a side-by-side comparison of the real photo (left) and the faked version published by The New York Post (right).

Can’t the New York Post play by the rules? Photo editors know they are supposed to disclose when an image is a “photo illustration” even if the image looks obviously Photoshopped to many.

Sunday, the NY Post’s May 12 print newspaper column by Michael Goodwin, displayed a photo of President Obama going up a flight of stairs on, presumably, Air Force One, his airplane on page 9.

Detail of New York Post column from print edition shows the undisclosed photo composite in context of the page.

The New York Post’s version of what it labeled as an “AFP/Getty Images” photo showed Pres. Obama shielded by a large black umbrella festooned with logos from NBC News, CNN and the New York Times.

Detail of photo credit used by New York Post. Note there is no acknowledgement that it is a photo illustration.

Something seemed off about the photo. The scale of the umbrella was slightly too big. But media logos were located well enough on the umbrella surfaces, in perspective, to suggest that the scene could be real.

However, we found the original photo that proves the Post added a larger umbrella with the media markings without informing their readers. See the image below. The original photo that the New York Post doctored was published by New York Magazine back on Sept. 9, 2011. The headline was “President Obama Needs a Better Umbrella Holder.”

Ironically, Michael Goodwin’s column for the New York Post, “Covering for Obama,” denounced “common tricks of the liberal media” but used Photoshop trickery itself to suggest that an Obama’s handler was using a media swag umbrella.