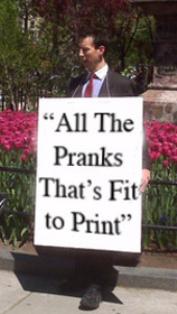 On a Gawker post, "Btwbdfimho" posted this photoshopped image of Ragsdale, replacing his plea of love with a joke on the New York Times.

For the third time this month, The New York Times’ City Room blog may have been caught reporting a hoax story.

An alleged computer consultant named Jeff Ragsdale was spotted in Madison Square Park holding a sign saying “I was verbally abusive.  I’m sorry, Megan.”  The New York Times’s City Room Blog reported that Ragsdale directed the sign to his former girlfriend of six months, Megan Brady, after calling her a “lying, untrustworthy person.”  Ragsdale said he had an alcoholic parent.

A quick Google search of Ragdale’s name turns up his MySpace page first, where he identifies himself as a comedian/actor and posts more than a dozen of his performance pieces.  Did The New York Times not check out its leading man before publishing the story?

The NYTPicker, whose sole purpose is critiquing The New York Times, reported April 24 on the hoax.

NYTPicker reported that “the whole thing is apparently a performance piece, concocted by two actors in love with the limelight.”  The two are actors and not employed in computer consultant work or advertising, as the New York Times first reported.

But, on the “Early Show,” the two said they had been dating for two years and had been engaged for six months.  As the City Room blog reported, Ragsdale said he had an alcoholic father.

Was the City Room’s writing a little too much like a romance novel?  Ending the piece with “He doesn’t know; don’t tell him. And stay tuned next week to find out what happened,” sounds a little less newsy and a little more daytime soapish.

The Associated Press reported some of The New York Times’ reporting on April 24 but cut out a lot of the romance.

On April 23, The New York Times updated that the story could be a hoax and that the paper would continue to investigate. The update read that the newspaper wished it had done the digging before publishing.

“On repeated questioning today, both Mr. Ragsdale and Megan Brady insisted that they are really a couple who really did have a falling out and that nothing depicted in the piece below is fake,” the update read.  The update directed readers to the comments, where a user identifying himself as Ragsdale had left a message.

That comment, posted April 24 at 3:32 PM EST, said “This is NOT a hoax. I did this out of love and desperation. Sadly I was verbally abusive to Megan and consequently she left me. Yes, I have acted and done stand-up before, but that has nothing to do with this. Perhaps it made it a bit easier to be out there in front of people, but this was a last-ditch effort to win Megan back. And only to get Megan back. I love her. I need her.”

Then, on April 25 at 5:44 PM EST, a commenter identifying herself at Megan Brady wrote similarly.

“This was not a hoax. Yes, I am an actor but also have a day job. Yes, Jeff is a comedian but also has a day job for the same reason which is to support the cost of Manhattan living . Jeff is not anything but a man who apologized in a very ‘Jeff way,’ which seems odd to most but not to me because I know him so well, he has been my best friend for quite awhile. He also knows me very well and knew how to get my attention. It worked. I have willingly given information to Elisa Mala including emails, photos, videos and personal contacts which prove this was not a hoax. Again, I want stress that this was not a hoax but the only way Jeff knew he would get my attention. I would not return phone calls or emails.”

Also on April Fool’s Day, NYTPicker noted that the City Room blogged about an improv group that claimed “more than a thousand confederates” rode the subway pants-less.  That story was treated a little more skeptically than the Turkewitz item, but it was still run.

We have written to the New York Times and will report any response in an update.