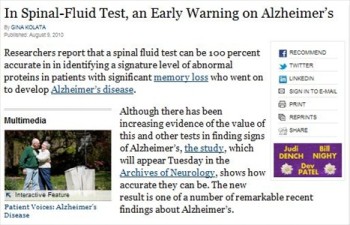 The Times' Arthur Brisbane wrote about this article on Alzheimer's. (Credit: NYTimes, screenshot)

Arthur Brisbane, the new New York Times public editor, devoted his first report for the Times on an article about a spinal fluid test claiming 100% accuracy in predetermining Alzheimer’s.  He originally wrote Aug 24 about the article, by Gina Kolata, expressing his concerns about the use of “absolutes.” (See StinkyJournalism’s report on the post here.)

In a follow-up post Sept 20, Brisbane wrote that he had “a lengthy discussion with Kenneth D. Miller, vice chair of the Department of Neuroscience at the Columbia University Medical School”

Brisbane learned that besides his concerns with the use of “absolutes” – which he blogged about here – Kolata’s article also contained “multiple factual errors.”

Further, Brisbane explained that after fact checking Kolata’s article with other studies on the subject, he and his assistant learned that the Times article should be corrected.  Corrections are “an action the Public Editor has the power to recommend but not to enact,” he explained.

But, in this case, Brisbane’s research and concerns did lead to a lengthy correction.  As Brisbane noted, the  correction ran both in the Sept. 16 print edition and online.

“An article on Aug. 10 about spinal fluid tests in Alzheimer’s research left the incorrect impression that the test can predict the disease with 100 percent accuracy in all patients. (That impression was reinforced by the headline.) In fact, the test was found to be as much as 100 percent accurate in identifying a signature level of abnormal proteins in patients with memory loss who went on to develop Alzheimer’s — not in identifying patients who “are on their way” to developing the disease.

“And the article misstated the source from which the finding of 100 percent accuracy was drawn. It came from a separate set of patients that the researchers examined to validate the protein signature they had identified in an initial group. (In the initial group, as the article noted, nearly every person with Alzheimer’s had the signature protein levels.)”