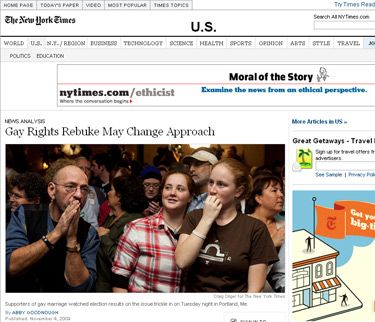 In the third paragraph of the Time's Nov 3, 2009 story, the author incorrectly describes the federal law that deals with same-sex marriage as a "ban," language that could perpetuate misunderstandings about this controversial subject. So far, the Times does not want to correct this second error. (The piece already has a correction).

We recently received a tip from a reader pointing us to an error in a New York Times story about the same-sex marriage vote in Maine on November 3. The article discussed the repeal of Maine’s law by public referendum, which had granted same-sex partners the right to marry and was signed into law by Governor John Baldacci in May 2009.

Written by Abby Goodnough, the New York Times article looked at the effects and ramifications of the law’s defeat. Yet in the third paragraph, Goodnough incorrectly describes the federal law that deals with same-sex marriage as a “ban,” language that could perpetuate misunderstandings about this controversial subject.

As Goodnough doesn’t specify which law she means, and as there is only one federal law that addresses same-sex marriage, it’s fair to assume she’s talking about the Defense of Marriage Act, commonly referred to as DOMA. This law, however, does not ban same-sex marriage.

We contacted Evan Wolfson, founder and executive director of Freedom to Marry, a gay rights organization, to confirm our reading of the law. (Wolfson also provided comments for Goodnough’s article.) In an email, Wolfson explained that the law does not ban same-sex marriage. Rather, “The so-called ‘Defense of Marriage Act’ mandates federal discrimination against couples legally married in states that have ended the exclusion from marriage.”

Additionally, the law sets out a definition of marriage, limiting the union to “one man and one wife.” (Further information about DOMA can be found at domawatch.org.)

As our tipster pointed out, the New York Times has already issued a correction on this story. It reads, “An earlier version of this article misstated, in one instance, part of the name of the law that bans federal recognition of same-sex marriage. It is the Defense of Marriage Act.” While this comes closer to DOMA’s definition, articulating that the law bans recognition of same-sex marriage and not the union itself, the story still lacks a complete and accurate description of DOMA.

The reader who contacted us says that numerous attempts to get the newspaper to issue a correction have gone unanswered. We have contacted Goodnough and the New York Times‘ public editor, Clark Hoyt, requesting that the newspaper change the language in the third paragraph so that it correctly reflects DOMA. We have also asked that they issue a correction for the change. We have not yet heard from Hoyt but will continue to pursue this issue and will update this story if/when we get a response.